﻿﻿West Bromwich Albion won last season’s meeting between the two teams 2-1, ending their sequence of nine straight defeats without a goal against Liverpool. It meant that last season Roy Hodgson won both Liverpool-West Brom games – one with each team.

This game however was closer to the long-term trend, and was also only the second time that Liverpool have won back-to-back Premier League matches away from home since September 2009. 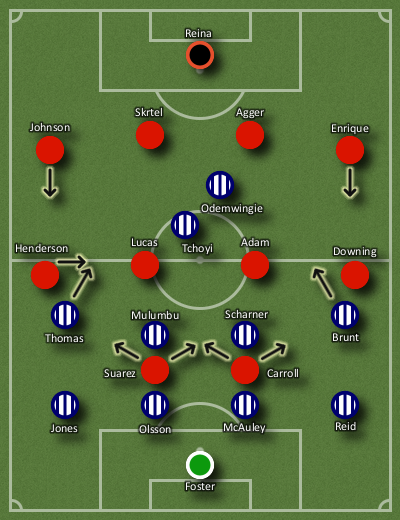 Neither side threw up any major surprises, both starting with their regular formations and, apart from the late withdrawals of Carragher and Gerrard (replaced by Skrtel and Adam), the starting elevens were also as predicted.

The tactical interest was around how Liverpool would break down the stubborn West Brom defence – which turned out not to be so stubborn. This report will focus on how Liverpool managed to solve this problem, from the back to up front.

When a 4-4-2 faces another 4-4-2, one team need to impose itself on the game by using the strengths of the players on the field. In this match, WBA were playing 4-4-1-1 where the player in the hole is more like a second striker than a third midfielder, but the differences are minor. As I said in the summer, when Liverpool play a “smaller” team with the same formation it will be up to them to impose themselves on the game and show the fact that man-for-man they are better than the opposition.

From the beginning of the match, Liverpool tried to pass, move and create opportunities whenever they could. Apart from a couple of patches in either half, Liverpool dominated the final third.

Several times I have criticised the team for a lack of patience when building attacks, rushing that final ball or moving it too quickly from the midfield. This match showed for the first time this season that the team can do it. They were far more patient, recycling possession in all areas of the pitch most of the time.

A great deal of this was achieved by the performance of the defensive line. First, the line played pretty high up the field – not dangerously so, but noticeably higher than usual. Dan showed in the match thread that the defensive line was almost identical in the past two matches, still against WBA most of the time (more so when in possession) the central defenders pushed higher up to squeeze the pitch and make easier the whole ball retention process.

Carragher’s absence was not the only reason for this, although his lack of pace means that often the line has to hang a little bit deeper. For me, this was a deliberate tactical decision by the manager rather than a quirk caused by the loss of the vice captain. If the need is there, I’m sure that the team could hold a high line with Carragher in there, though it would require the right conditions and a passive midfield pairing.

The direct effect of the high line was that the space between the lines when Albion had the ball was much smaller. That compacted the team and allowed Liverpool to get closer to the players they were marking. In turn, that made it easier to regain the ball – so when combined with the overall patient passing approach in deep areas Liverpool were able to take control of possession.

Both Skrtel and Agger looked assured in possession, often playing simple balls between the two of them before knocking it into the midfield or down the wings. Agger is clearly the more comfortable on the ball and was the main recipient of passes from Skrtel and Reina (who had his best passing performance in ages by completing 32 out of 47 attempted). The Dane then looked to make longer passes down the field or partake in one of his trademark runs into the midfield with the ball at his feet. 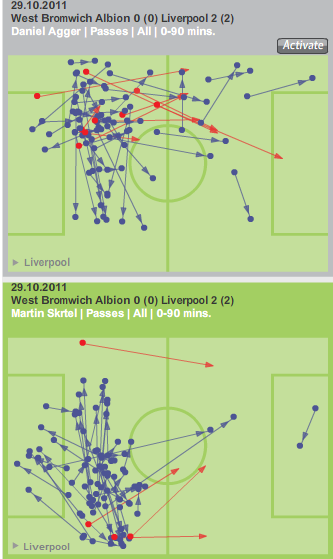 This patient approach from the central defenders and ‘keeper gave enough time for the team to get into the right attacking positions by moving off the ball and attempting to lose their markers. The team often looked like a 2-4-4 when it had the ball, with the full backs given the freedom to come level with the midfielders and the wingers pushing on with the forwards.

The patient nature of the team meant that the full backs often came closer to the centre backs to receive the ball and then pushed forward with it at their feet. From here they could continue running or create passing triangles with the winger and the nearest central midfielder. This style of attacking didn’t appear to suit Enrique (strangely, as up to now his passing was more than accurate) who had a poor game in terms of passing (46 out of 66, or 70%). He often misplaced passes towards the central area, although he was more successful when playing it down the wing. Defensively, however, he remained solid. 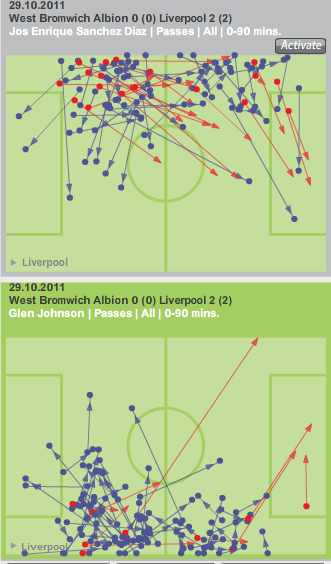 The midfielders were also an integral part of the match. Lucas held the deeper role, as is usual, playing both as a shield to the defence and the link between the defensive line and the rest of the team. He would pick the ball up from the back four and then bring it into the midfield. That freed Adam up to make forward runs and support the strikers, which he did from the very beginning of the match when he shot over from a good pass from Suarez on the right wing. He did this a few times (on and off the ball) but generally held his position so that he could be involved in the overall passing rhythm.

Feeling Lost? Where Are We?