A Jakarta-based journalist and editor. Author of Without a Dream in Our Hearts (http://withoutadreaminourhearts.blogspot.com), a blog about supporting Manchester City in the 21st century.

It was a sorry sight. The players of the Indonesian national soccer team trudged off the pitch at the national stadium, and it wasn’t even full time yet. With fans venting their anger at the team’s performance by launching fireworks onto the pitch, match officials postponed the game while the air cleared, prolonging the embarrassment of a team that was about to lose 2-0 to Bahrain in a vital qualifying match for the 2014 World Cup. Outplayed, out-fought and out-thought by a country smaller than the Indonesian island of Bali, with a population of 1.2 million. I must admit, the future looked bleak for Indonesian football.

But not all is as it seems. Every weekend, on the fields surrounding the national stadium in Central Jakarta, a ray of sunlight may just be cutting through that ominous outlook. Here, a small part of the future of Indonesian soccer is taking shape – and Liverpool Football Club is behind it. For this is the home of Liverpool FC’s International Academy & Soccer Schools in Indonesia (LFCIAss). If Chris Wren, Commissioner of the Academy, has his way, then this Academy is going to do much for the future of Indonesian soccer.

“Liverpool FC is the first foreign club to set down a real footprint in this country,” says Wren, enthusiastic and passionate about the Academy’s vision. “The Club is committed to quality, sustainable development in Indonesia. Everything done here is in line with the standards of Liverpool Football Club. What you see here is a direct collaboration between the club, the Indonesian Liverpool supporters club [Big Reds] and this academy and soccer schools programme.”

LFCIAss informally opened its doors in June this year following a two-year relationship that tapped into the local expertise, credibility and networks of the British Chamber of Commerce. Today, LFCIAss in Jakarta welcomes 120 soccer-loving children onto its pitches every week on a pay-as-you-play basis, ranging between the ages of 6-17.

The soccer school in Jakarta is just the beginning. The Academy is looking to expand across the country. Beginning in February next year, there are plans to open one additional facility each month taking in the centres of Bandung, Solo, Medan, Surabaya, Yogyakarta, Palembang, Riau, Makassar, Kalimantan and Papua. Then starting in March, the LFCIAss will be holding talent scouting competitions on a road show basis in six cities across the country, assessing around 3,000 kids every weekend. At the end of this process, the best 15 kids will be chosen to go to Liverpool to for a first-hand experience of the Academy.

This is one side of the Academy’s operations: developing talent and then channelling that talent to Liverpool. But that’s only half the story. The Academy also intends to give something back to Indonesian football.

“It would be fantastic to have a child accepted by Liverpool Football Club, but the LFCIAss model in Indonesia will make a significant contribution to raising the overall standards of youth soccer in this country,” says Wren, as a ball rattles the back of the net on the training pitch nearby.

“We’re keen to reach as many kids as possible. We’re trying to give them the Liverpool experience and we don’t want a situation where any child is excluded from that.” 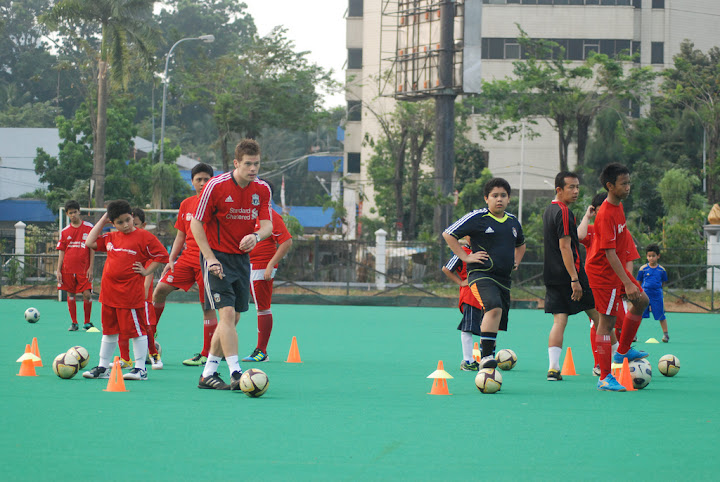 The Academy appears to be moving toward that target at pace. A Liverpool FC-branded pan-national youth league is in the offing, and the participating teams will come from 3,000 Indonesian football schools already active. The hope is that the youth league becomes a talent pool for the domestic football scene and beyond. To add to this, the Academy will be organising mobile football camps, engaging kids in towns across the country.

It doesn’t stop there. The plans extend to integrating Indonesian-centric health awareness sessions into football training. The academy also wants to organise a set of best practice sessions with Indonesian clubs, bringing over staff from the LFC Academy and transferring knowledge to clubs in Indonesia in terms of football administration. And if all that wasn’t enough, by the end of 2013 an Academy home will have been completed, which will include an educational centre offering scholarships for children to aspire to careers embracing all aspects of soccer.

Paul Barratt is the man responsible for implementing the soccer dimension of this vision. Barratt, 24, from Warrington, is himself a product of the LFC Academy. Aside from overseeing training sessions, he’s also responsible for identifying and training-up Indonesian coaches to the standards of LFC.

“Training-up Indonesian coaches is vital in sustaining the development of the game in this country. You need a group of people who can teach the kids the basics of the game,” says Barratt, who came through LFC’s ranks under the tenures of Gerard Houllier and Rafael Benitez.

I ask Barratt whether there is any sign of an Indonesian Steven Gerrard coming through the ranks. Not yet, it seems, but Barratt is keen to stress the potential of what he sees on the training pitch. “Many of these kids have the right skills but they lack a good understanding of the game. We focus a lot on movement. It’s really important for kids to understand space on a football field, how to move into it, how to exploit it. Emphasis is also placed on controlling the ball.”

This is a view that is echoed by parent Ardie, 33, from Central Jakarta. Ardie has one son attending the school, aged 14 years old. “My son really enjoys the coaching here. Having foreign coaches helps because they bring better drills. At other schools, it’s about endurance and physicality. Here it’s about technique and the game itself.”

Syam Satrio, 43, from South Jakarta, has a 13 year-old child attending the Academy. He thinks the training has improved his son to the point where he’s now the captain of his team at school. “My son really hopes that one day he be able to play in Europe, but if not, perhaps for one of Jakarta’s clubs or even the Indonesian under-23 team!”

It’s clear that there is so much enthusiasm for football in Indonesia. That’s why it’s such a travesty that the country continues to languish at 140th in the world rankings. But for the game to improve domestically, the answers may well lie in places like this Academy, which imbue both children and coaches with the right approach to the game.

And Wren himself is at pains to emphasise the long term view: “People expect results quickly, but development takes time. The important thing is we’re identifying the kids early on, so our results will only begin to take shape in around seven years’ time. We have to be patient. The process can be fast-tracked by corporate Indonesia coming on board early for the journey with us.”

If the academy continues to move forward, then one senses that this patience will surely begin to reap dividends for all concerned.