There has been a lot of debate, both here and elsewhere, about how efficient Liverpool have been in front of goal so far this season. The stats show that they have so far only converted 14 of the 194 shots they have had in the league.

That’s a paltry 7% return in front of goal, which makes for painful reading when you consider that both Manchester clubs have a conversion rate of 17%. Take United (if we must) – they have had 26 less shots than the Reds, yet have scored double the amount of goals. Ouch.

Whilst the likes of Andy Carroll and Luis Suárez will be in part responsible for these disappointing figures, the opposition goalkeepers will have played their part too; for instance, Swansea’s Michel Vorm (who incidentally picked up a clean sheet at Anfield with Utrecht in last season’s Europa League) and Norwich’s John Ruddy only conceded one goal between them in 180 minutes at Anfield, despite Liverpool amassing fifty-four shots across the two games. They must have had the game of their lives.

Or did they? I’m going to look at how the performance of goalkeepers against the Reds compares to their average for the other league games they have appeared in so far this season, and hopefully pull out some key numbers.

As with all statistical analyses, it’s important to remember that there is context that unfortunately I can’t possibly provide; that is, the quality of the shot that a goalkeeper has had to face.

A scuffed effort that rolls serenely across the turf into the ‘keeper’s grasp is, statistically at least, the same as an unstoppable blast that flies into the top corner, in that they’re both a shot on target. It’s also worth bearing in mind that when considering the form of the goalkeepers in their other matches, that they won’t have all played the same opponents.

The first thing I noted when looking at the statistics of the various goalkeepers is that Liverpool have yet to benefit from any mistakes that they might have made. Opta record ‘missed crosses’ and ‘defensive errors’, and although over a whole season these figures are usually low (Reina, for instance, has only averaged five and two respectively over the last three seasons), the Reds have so far been the beneficiaries of zero missed crosses and only one defensive error.

Even then, as the goalkeeper who made the defensive error (Asmir Begovic of Stoke City) kept a clean sheet, clearly it was of little real benefit to Liverpool. The eleven goalkeepers who have faced the Reds so far this season have missed a total of nine crosses and made thirteen defensive errors in their other matches between them. These aren’t huge numbers as I said, but at the same time, as the team who have had the second highest number of shots this season, Liverpool can perhaps feel a little unfortunate not to have received one or two helping hands from goalkeeping gaffes.

The lack of missed crosses is probably the more painful of the two statistics for Liverpool; on average two of their crosses are caught by the opposition keeper each game, whilst the same keepers only catch 1.16 crosses (on average) in their other matches. Perhaps the Reds’ widemen are putting their crosses too close to the goalkeeper in comparison to players on other teams? 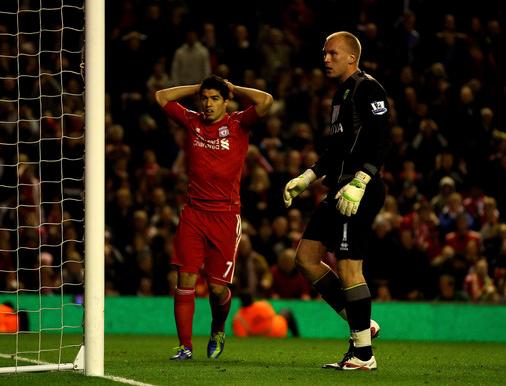