It’s been a long time since Liverpool played Swansea. The last meeting was an 8-0 thumping in the Reds’ favour in a 1980 FA Cup replay. In the previous six matches between the two, Swansea failed to score five times. Once again Liverpool shut them out – but unfortunately, they were unable to get anywhere near eight goals themselves. 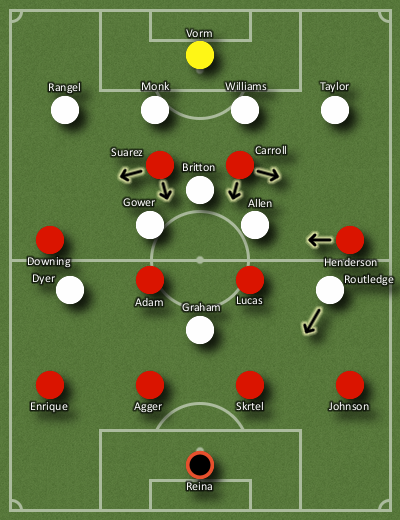 Liverpool decided to keep faith with the team that played well against West Bromwich Albion last week. Swansea surprised me by playing 4-1-2-3. I expected a 4-4-2, but  this was more down to my lack of knowledge about how the Swans play more than a curveball thrown by Brendan Rodgers.

Both sides showed their hands early. The visitors flooded the centre of the field using their compact midfield trio while their wingers were pushed wide and high up the field.

Liverpool played with their regular 4-4-2 which looked to build up from deep and then hit passes to the flanks once they reached the final third. This was to avoid the centre of the pitch where Swansea had a numerical advantage.

In the opening minutes Swansea sat deep, allowing Liverpool to play. The home team took advantage and created some good chances, mainly down the left wing. In the second minute Downing hit a good cross to the far post but Henderson was a little late to the ball and couldn’t take advantage.

As the half progressed, Henderson started to come inside to play a role similar to the one he performed against West Brom. This helped create parity in the centre by giving support to Lucas and Adam and allowed Liverpool to recycle the ball more efficiently. It also opened up the right flank for Johnson to run down. To avoid being overrun defensively, Skrtel pulled a little wider to cover the right back area while Enrique generally held his position so that Liverpool remained three-against-three in the defensive zone.

This created a lopsided 4-4-2 for the home team, and Swansea found this very difficult to track without sacrificing their own framework. As a result, Adam was able to hit direct passes to the flanks (mainly to Downing who was stretching the play in the wide left position) and the Suarez-Carroll partnership roamed all over the final third to disrupt Swansea’s marking patterns.

In a two-minute spell around the eighth minute Liverpool created three good team moves. First Adam fed Carroll with a long pass from deep, but Henderson didn’t anticipate the flick on. A minute later, Adam and Downing exchanged passes which ended with Downing being released by a beautiful through ball. His cross found Carroll at the far post, but the Englishman hit the bar from six yards out               . The third chance also involved Carroll as he found himself on the left flank. He crossed the ball into Adam’s path, but the ‘keeper was equal to it.

Liverpool were well on top in the tactical battle in the first quarter of an hour, enjoying a 55% to 45% possession advantage. 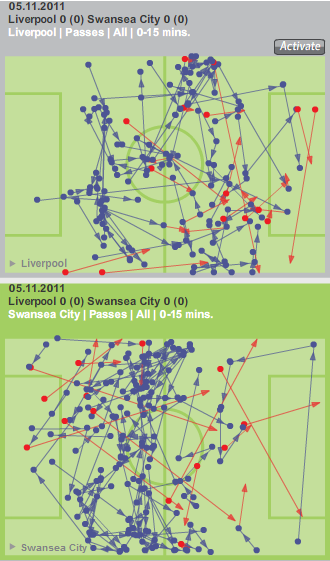 This domination was not translated into goals. Partly this was because Liverpool were not fluid enough off the ball. On a few occasions they worked the ball into dangerous positions around the edge of the area, but there was no support forthcoming from teammates. This was evident when Suarez was dribbling around the edge of the box with no passing option; it was also obvious when Carroll received crosses from out wide and nobody was there to pounce on any knock-downs or flick-ons.

As in the Norwich City game, the visitors acted quickly and adapted to Liverpool’s dominance. Around the fifteen minute mark the midfield changed its approach. They played far more defensively rather than focusing on passing the ball between them.

Allen and Gower dropped deeper and wider, doubling up against Liverpool’s threat down the flanks. This helped their full backs snuff out Liverpool’s main attacking outlet. Britton remained deep and central which gave the centre backs an extra body to deal with Suarez and Carroll whenever they roamed from their usual positions. To prevent Liverpool overrunning the midfield, the wingers dropped back and made sure the home team’s full backs were marked. This meant Swansea were defending with nine players while Liverpool were never attacking with more than six or seven because their central midfielders remained deep.

Liverpool were able to pass the ball more patiently, but this meant that they lost their attacking edge. They were no longer in a position to speed up the tempo by hitting balls to the flanks because the wide players were well-covered. This slower approach played into Swansea’s hands as now they had enough time to get their nine players settled in defensive positions, cutting off Liverpool’s options in advanced areas and giving them the chance to exert pressure on Liverpool on the ball.

Suarez responded by dropping wider and deeper but this did more harm than good. Carroll was once again isolated up front. If he came deep as well to find support then Liverpool were effectively strikerless and completely outnumbered in the final third.

Both the forwards tried their best to give some fluidity up front at a time when the rest of the rest of the team looked very static. To try and compensate for the lack of drive through the centre, they roamed all over the pitch, coming deep or wide whenever they could. The problem was that they were often too far apart to work well as a partnership and they were getting no support from the rest of the Liverpool players. The attacking patterns remained dull and predictable. 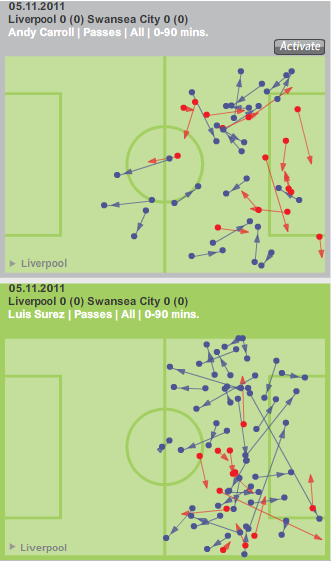 Liverpool were stunted all over the pitch. The midfielders couldn’t risk pushing forward because of Swansea’s extra man in the middle, which in turn meant that there was no service to the other attacking players.

So, the Reds’ dominance faded and was replaced with a greater threat from Swansea. In the twenty-eighth minute the Swans build a good attack using all areas of the field. Routledge then received the ball on the left, cut inside past a few Liverpool players and then sent a brilliant cross to Graham whose volley was punched away by Reina.