All data used in this article is from http://www.eplindex.com/stats/

When Liverpool fans think about “hoofing” one player springs to mind more than anyone else.  Is this reputation fair or is the player with the 2nd most appearances in our history unfairly singled out?  To put it another way and paraphrase Zen philosophy: If Daniel Agger hits a “Long Pass”  that doesn’t reach its target, does anyone notice?

Following on from my post about how long each player “went long” in the Stoke match, I decided to broaden this out to look for any noticeable patterns or trends using the season summaries from the last 3 years.  To enable this exercise, I’ve collated all the Opta data from 2008/09 to 2010/11.

Before we look at outfield players I want to look at Reina’s stats separately as his volume skews the standard deviation analysis.

The things that stand out for me here is the 12% increase in Reina’s “Go Long%” in 2010/11 compared to the previous two seasons.  There was a lot of talk last season about the negative effect of Hodgson’s goalkeeper coach Mike Kelly on Reina’s distribution.  These season stats validate that but it’s worth noting that to maintain a level of 95%, the % under Dalglish must also be higher than in previous seasons.

Please note that only outfield players who’ve played more than 1,000 minutes in a season have been analysed.   The only exception is the inclusion of Aquilani 09/10 (815 minutes).

First in absolute terms, the amount of long passes and long balls attempted.  These are the only players with over 400 Long Attempts (median is 246) 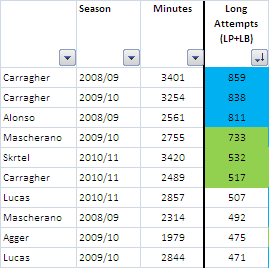 The names on the list are a mix of the central midfielders who sit at the hub of the team (Alonso, Lucas and Mascherano) plus central defenders (including Carragher in all three seasons).  The seven names at the bottom of this list (not shown) are all strikers (Torres, Suarez, Ngog, Keane) and all less than 40 in total. [Obviously strikers rarely get to pass the ball forward over any great distance.]

Moving onto the players who hit the most Long Attempts as a % of All Passes.  These are the only players with a “Go Long%” of over 30.  The average is 22% 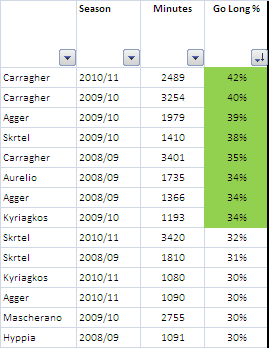 Here we see a shift from midfielders to defenders.  All of Carragher, Skrtel and Agger’s seasons are in the list taking nine of the top 12 places.  As in the first chart, the names at the bottom of the list (not shown) are all strikers with a “Go Long%” of less than 10%.

It’s when we move to the worst “Long Attempt Completion (LAC) %” that things get interesting.  Here are the worst 10 (average is 61%): 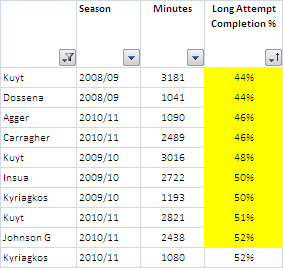 Moving onto the best 11 and we see the reappearance of the central midfielders.  Lucas’s last two seasons top the list followed by Alonso.  Mascherano and Gerrard get two entries along with Aquilani.  Most interestingly, Skrtel in 08/09 gets a “green” for his 70%. 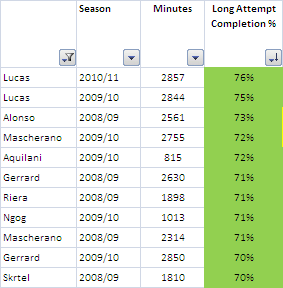 Almost identical and centre back partners too.  Yet one has a reputation for being a cultured, ball-playing libero and the other as an agricultural stopper.  Perhaps it is whether the pass is on the ground or in the air but that’s one thing we can’t actually derive from the data.  The other thing we can’t derive from the data is how long, we just know “over 25 metres”.

My final metrics are an attempt to illustrate where the problem lies and that’s the TOTAL and FREQUENCY of an Incomplete Long Attempt (ILA).  Firstly the top 10: 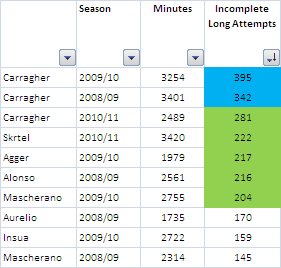 Carragher fills the top three positions, two of them with a “blue” and all way above the median of 106.  Perhaps it’s this absolute number that perpetuates things.  The fact that he plays a lot of minutes, he plays a lot of his passes long so we just see so many more ILA from Carragher than anyone else.

Finally moving onto Minutes Per ILA, I’ve listed all players with 15 minutes or less because this would equate to six per match.  The median is 17.  The list is dominated by defenders, mostly central but also some fullbacks.  Carragher again shows prominently but all three of Agger’s season are again in the list.  Even Alonso’s annus mirablis of 2008/09 makes the list meaning Xabi did it over seven times per game! 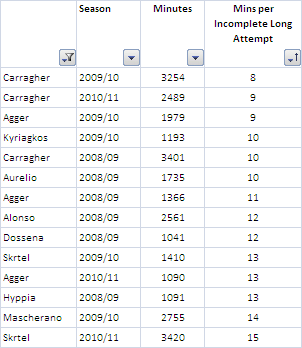 The metrics I’ve derived from the Opta data will not tell the full picture.  There will always be an element of context that the metrics cannot provide (at the moment).  There is also the unquantifiable issue of “style” (essentially a “long pass” versus a “hoof”).  However I believe that by looking at whole season’s worth of data these factors can be mitigated to a good extent.

So what can we conclude?  Well going back to the Stoke game, this was definitely an “outlier” in that Carragher and Skrtel’s LAC% (24 and 18 respectively) was so bad and much worse than normal.  It also showed how Lucas’s Go Long% of 27 with LAC% of  80 was fairly typical for him, even if 80% was slightly better than even his high standards.

This investigation also shows that Jamie Carragher is far from the only offender. Yes he may account for a lot of the volume of long balls over a season but next time Daniel Agger is passing it long, it might be worth noting how often he fails to find his man! 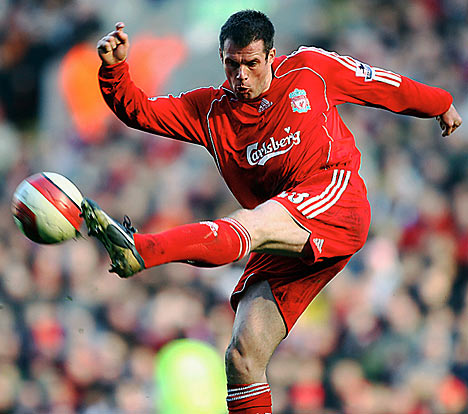