Simon Fear – pro-qualified referee and Tomkins Times member – takes an uncompromising and unbiased look at the officiating in games involving Liverpool in August 2011. Was luck for or against the Reds?

Liverpool’s first home match of the season saw them face a new-look Sunderland side. Games between the two sides have a record of controversial incidents and this one was no different. Within four minutes Phil Dowd had a major decision to make following a penalty appeal after Luis Suarez was fouled by Kieran Richardson.

It began when a Sunderland corner was cleared to the halfway line. Richardson, pressurised by Suarez, tried to chip the ball forward, but the Uruguayan jumped and blocked the ball which ricocheted towards the Sunderland goal. Suarez gave chase with Richardson in pursuit.  As Suarez approached the goal and keeper Mignolet came out, Suarez knocked the ball to his right and started to go round him when he was tripped and pulled down by Richardson. There were a number of decisions to be made in relation to this incident.

Firstly, Suarez could have been penalised for hand ball. Law 12 is quite specific that ‘A player is penalised if he deliberately handles the ball’. FIFA provide guidance to assist referees who are told that when considering intent/deliberateness they should take into consideration: (1) The deliberate movement of the hand towards the ball (2) The distance between the opponent and the ball, as this affects the amount of time the player has to remove his arm, and (3) The position of, or movement of the hand/arm (are they in a natural position or have they been moved to an unnatural position?); however this does not necessarily mean that there is an infringement.

In this instance Suarez is close to the ball but deliberately raises his arms above his head (it would appear he was shielding his face), and the ball clearly strikes his arms. Due to this being a quick break Phil Dowd is some way behind Suarez and not in a position to see where the ball strikes the Uruguayan. If he had, I suspect that he would have stopped play and awarded Sunderland a freekick for handball. (The picture shows the ball having already hit Suarez on the arms). 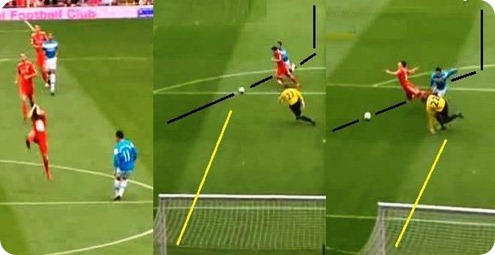 The second decision is a simple one. Richardson clearly fouls Suarez and the award of a penalty kick is straightforward.

The third decision is which punishment is given to Richardson. The referee will be considering a number of things including the cynical nature of the foul (Richardson made no attempt to play the ball). However, to send Richardson off he has to be sure in his own mind that he denied Suarez ‘an obvious goal scoring opportunity’. The laws state ‘denying an obvious goal-scoring opportunity to an opponent moving towards the player’s goal’. As the picture shows Suarez initial approach is a fraction to his right hand side of the penalty spot but ‘towards goal’.

The Sunderland goalkeeper is also in line with him so Suarez plays the ball to his right, creating an angle to go around the keeper. At this point the ball, and all three players, are within the width of the goal. (The yellow line signifies the line of the near post) As Suarez continues going around the keeper he is fouled by Richardson, Mignolet has not fully committed himself and Suarez is still in easy playing reach of the ball. The ball itself has travelled a few yards outside of the width of the goal. Again, given that this was a quick, unexpected break Phil Dowd is some distance from the incident, and he has to make an instant decision. By the time Suarez completes his tumble the ball has travelled a couple more yards away from goal and Mignolet to his credit has stayed on his feet and is trying to cover Suarez’s movement. One of the things I believe would have swayed Phil Dowd is that the distance of the ball and player beyond the width of the goal and the direction of the ball’s travel are significant factors for the referee to consider. But Dowd would also have had to consider that Suarez was ‘still moving towards the player’s goal’ despite his change in direction, which was purely to facilitate him going round Mignolet, and thus Suarez was denied an obvious goal scoring opportunity.

In the circumstances I believe that Mr Dowd took the easy option in only cautioning Richardson. This was as clear a case as will be seen all season and merited a red card regardless of the fact that it happened in only the 4th minute of a new season.

Buying British - Is It Best?