All data used in this article is from http://www.anfieldindex.com/

It’s fair to say that Alberto Aquilani divides opinion.  In fact in the modern era I’ve rarely known a player to divide the fanbase to such extremes.  No less a respected writer than Brian Reade in his essential book “The Near Death of Liverpool FC – 44 months with a pair of cowboys” called Aquilani “the worst transfer in Liverpool’s history”.  Everything around his transfer to Liverpool from the injuries to the politics of his arrival to his girlfriend has been debated ad nauseum – apart from one thing: his actual performance on the pitch using the official Opta data.  Just how good or bad was he?

Thanks to trailblazing sites like Anfield Index, the use of Opta data has grown hugely over the last 18 months amongst general fans.  However while Aquilani was still playing for LFC, the only data that was generally  known in the public domain was that he had the best minutes per assist in the top five European Leagues.  I’ve also heard Reds who’ve slated this, saying things like “one of them came of his backside when on the floor against Burnley” and “the assist stat is skewed and makes him look better than he was”.  So to get a holistic view we’ll need to look at much more than just assists.

My approach to the Aquilani 2009/10 analysis will be in two parts, this one covering how well his performance compares to his team mates and a subsequent post comparing him to his peers in other top teams.

Before starting the analysis you have to ask what type of midfielder is Aquilani?  The destroyer, passer or creator? Well empirically he is not a destroyer.  So therefore we need separate ways of analysing PASSING and CREATIVITY using the Opta data.

The other problem is that Aquilani only played 815 minutes (and only nine starts) in the Premier League which is about a quarter of a league season, so we also need metrics that do allow an apples v apples comparison.

Finally there must be the caveat that Opta themselves are improving the metrics that they collect year on year.  Some of the best and most meaningful metrics only came into existence in 2010/11.

For passing, one of the metrics that most closely correlates to a team’s goals scored, wins and final league position is Passes Completed in the Final Third.   Unfortunately this metric was not collected before the 2010/11 season so Attacking Half Passes is used instead.

Regarding the results, I think MPAHCP is the most important as the amount of passes completed is a better metric than pass completion as it is more closely correlated with open play goals scored.  Alonso is miles ahead on minutes per completed attacking half pass and gets a “green”.  Gerrard’s three seasons are all closely grouped above average and Aquilani ranks with him.  Lucas’s three seasons are closely grouped but below average and trailing in last is Meireles.  It should be noted that throw-ins can skew passing metrics but this should be less of an impact for central midfielders.

On pass completion, Alonso again shows very well but is beaten by Lucas last season who get’s a “green” for his efforts of 78.9%.  Aquilani ranks an above-average fifth here.  Gerrard’s performance suffers because he takes a lot of corners and free kicks with low completion%, and his 09/10 gets a “yellow” along with Meireles.

Moving on to how involved the player was at the “hub” of the team.  I feel that the “Touches Per Minute” is the most relevant but sadly the fantastic “bad control/lost possession” metrics only started to be collected in 2010/11

On Touches Per Minute, Alonso comes top with a “blue” rating.  Gerrard 10/11 shows very well and Aquilani is again above average.  Yet again Meireles trails in last with another “yellow”.  One surprising find is that Lucas has declined in each of his three seasons.

On the minutes per completed pass, Alonso has a Xavi-esque 75 completed passes per match and then six players are closely grouped on 1.8 or 1.9.  Meireles again trails in last with a “yellow”.

The final passing metric relates to long passes which Opta define as “defence to attack”.  This is a good indicator of a passers ability to switch or transition the direction of play. 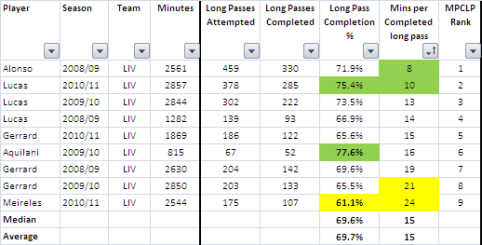 Yet again Alonso tops with a completed long pass every eight minutes while Lucas 10/11 also gets a “green”.  Aquilani ranks sixth with a slightly below average 16 minutes.  The surprising finding for me was how low Gerrard ranked, even in 08/09.

Pulling it all together for passing, what do we see?  If the minimum “score” is five and the maximum is 45, it puts the performance of Alonso and Meireles into context.  Alonso is simply miles ahead of his peers while in passing, Meireles is very much bottom of the class and this is reflected with an “orange”.  Gerrard 09/10 also shows poorly with a “yellow”. Elsewhere, Aquilani is almost inseparable from Lucas and Gerrard 08/09 and 10/11 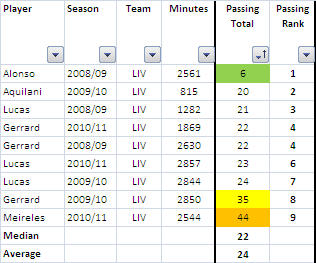 First up, the most important attacking metric: goals.  But not as we know it.  Here we look at “Open Play Goals” excluding penalties and direct free kicks because they can skew the results 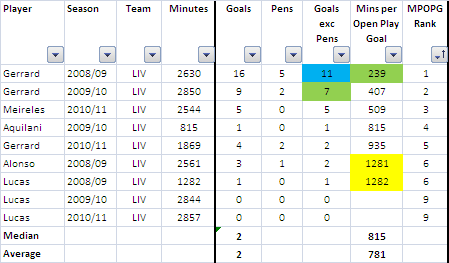 Unsurprisingly Gerrard’s 08/09 season when he received Football Writers Player of the Year comes out top with a “blue”, followed by 09/10 with a “green”.  Meireles ranks a clear third.

Now moving to three creative metrics, the (in)famous “minutes per assist” plus minutes per chance created and minutes per accurate through ball

I feel that MPCC is the most important here.  Aquilani tops the minutes per assist rank but otherwise Gerrard dominates all three categories and gets a “green” for minutes per through ball.  Lucas trails badly here and even gets a couple of “oranges”.

It’s worth noting that Meireles and Alonso both rank fairly close to Gerrard in MPCC and there is a big disparity between Aquilani’s MPA and MPCC.  Perhaps the smaller sample of Aquilani’s minutes has skewed his assists:chance ratio.

Another thing worth noting is that before 2009/10, Opta did not separate open play and set play chances created so the figures above are for ALL chances.  If we look at just Minutes Per Open Play we have:

The final attacking category is dribbling.  Opta classify a dribble as beating an opponent and retaining possession and control of the ball.  Obviously this is a key attacking metric as it demonstrates the ability to take an opponent out of the game. 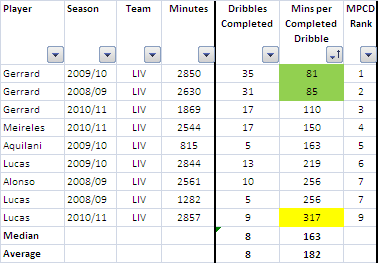 Yet again Gerrard dominates here with 08/09 and 09/10 worthy of a “green”.  Meireles and Aquilani are above average and well clear of Alonso and Lucas.

Pulling it all together for attacking, what do we see?  Gerrard 08/09 dominates attacking just as Alonso did passing and gets a “green”.  Gerrard 09/10 and 10/11 are then well clear of everyone else.  Aquilani is then a clear fourth, outperforming Meireles on a head-to-head.  Alonso and Lucas trail way back. 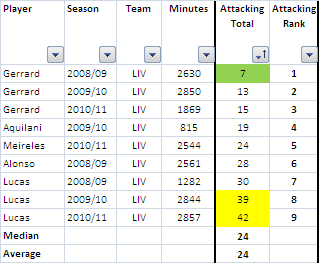 After looking at passers and creators separately, do we see any clear results for all-round midfielders? 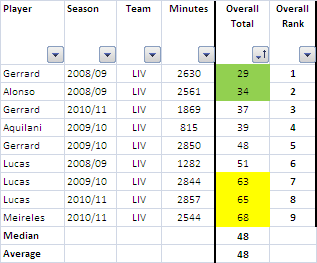 Gerrard 08/09 comes out top, slightly ahead of Alonso and both have a “green” rating.  At the bottom, Lucas and Meireles are “yellow” clearly illustrating they are one-dimensional midfielders compared to their peers.  Lucas can only ever be a Passer (or perhaps a passer/destroyer if we were to do the analysis).  Meireles can only ever be a Creator.

Aquilani comes in fourth, slightly above average.  The most remarkable finding is that compared to his peers, none of his metrics had a colour rating, apart from the “minutes per assist” anomaly.  He therefore did nothing exceptional and nothing poor and was instead just quite good at everything.  He doesn’t rate as good at passing as Alonso or Lucas and not as good as attacking as Gerrard.  On the flip side you could say he is a better attacker than Alonso and Lucas and a better passer than Gerrard!

I guess the key factor would be the manager’s approach and whether he wants to play three central midfielders or two.  In a three there is room for three best of breed specialists with a destroyer/passer/creator (Mascherano/Alonso/Gerrard anyone?).  In a two, both would have to be “generalists”, either reasonably strong at everything, or very good at two of the three disciplines.

The most frustrating aspect is that there will always be the caveat of the relatively small sample of playing time compared to peers.  A personal view is that it’s such a waste that we never got the opportunity to reach definitive conclusions.