A strange game, the opener versus Sunderland. Liverpool could – should – have been out of sight at half-time, and been playing against 10 men from the opening minutes. By the end, the Reds looked a tired, ragged team, holding out for a 1-1 draw at Anfield.

Kieran Richardson was not sent off because Phil Dowd gestured that Luis Suarez was heading away from goal; quite how you’re supposed to dribble around the keeper without moving the ball at a 45º angle I have no idea; if you don’t change your angle you run straight into the keeper. Look at the old Ian Rush videos, at all those goals he scored when, for a moment, his body was first angled towards the corner flag, before slipping the ball into the net.

Suarez missed the resulting penalty before quickly making amends with a sharp header from a Charlie Adam free-kick. (One game, one set-piece assist.) Andy Carroll had a goal disallowed for the most gentle of touches on Anton Ferdinand, and Stewart Downing rattled the crossbar from 20 yards after a superb run from inside his own half. The first 45 minutes saw some pass and move of the highest quality.

However, overall there was a lot to be positive about, while the main problem will automatically resolve itself. 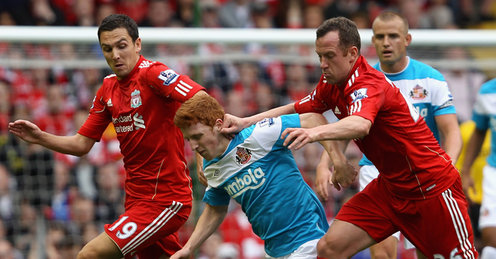