Although Luis Suarez was not involved at all in pre-season training, his Copa America-winning performances with Uruguay were deemed enough to keep him sharp, and he started up front alongside Andy Carroll. New signings Stewart Downing, Charlie Adam and Jordan Henderson all made their debuts. Steven Gerrard, Martin Skrtel and Glen Johnson were all missing through injury. The captain’s absence was significant – Liverpool have averaged 1.87 points-per-game with him compared with 1.69 points-per-game without.

For the visitors, John O’Shea was ruled out with a hamstring injury, while fellow new signings Kieran Westwood, Craig Gardner, David Vaughan, Connor Wickham and Ji Dong-Won were all on the bench. Steve Bruce said after the game that he had made a conscious effort not to introduce too many new faces too quickly. Wes Brown and Sebastian Larsson started, with Craig Gordon, David Meyler and Frazier Campbell all unavailable due to knee injuries.

Liverpool had an 8-1-1 record against Sunderland in their last 10 meetings, and only lost one of their last ten home matches against all opposition.

Sunderland, meanwhile, had only scored three in their last 14 against Liverpool, and despite having won their previous two away matches in the Premier League at the end of last season, the last time they won three away matches in a row was in Autumn 1999 – the only time they’ve ever done so. Last season they were the only team to go three matches without scoring a goal, and scored with only 11% of their shots, the third worst record. 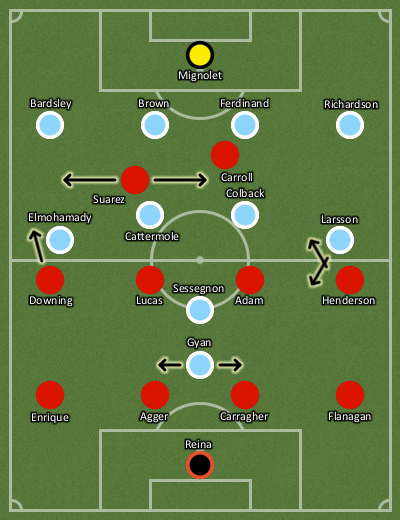