Bolton’s record against Liverpool is poor. They had lost their previous nine matches in the Premier League, not scoring in six of those. Liverpool have won 11 out of 12 at home. Bolton’s away form in general has been bad, with the win over QPR their first clean sheet in 26 away matches. By contrast, Liverpool are on a run of just one defeat in their last 11 at home. 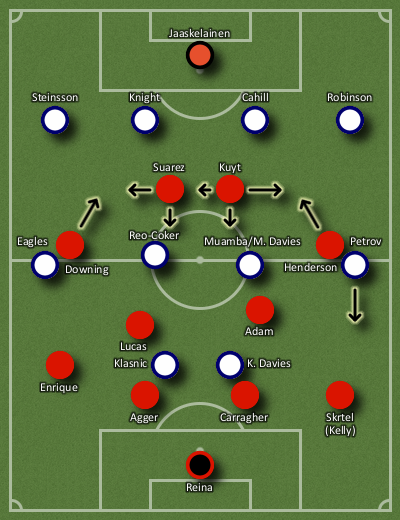 Against Arsenal, Dalglish went for a 4-1-2-3 formation so that the midfield could disrupt Arsenal’s passing rhythm. For the second home match, the Liverpool manager went back to 4-4-2, but once again made some selection decisions which raised eyebrows. Carroll was left on the bench, with Suarez partnered by Kuyt in a highly flexible, mobile front two – almost a double false nine pairing. As against Sunderland, Henderson moved to the right wing.

Kenny Has LFC Back At Rafa’s Level