By Paul Grech, with additional comments by Paul Tomkins

For all of the positive feeling that has returned to the club ever since Kenny Dalglish took over as manager, the fact remains that this has been an overwhelmingly disappointing season for Liverpool.  Adrift in the league from the start and knocked out of both domestic cups at the first stage, there wasn’t even the consolation of a good European run.

There is however an area where Liverpool have excelled and that is in direct matches against the other teams in the top six.

Indeed, a mini-table that features only the results between these top six sides so far this season sees Liverpool on top, a position held jointly with Manchester United even though these have played a game less.  Liverpool also have the best goal difference – a positive of three – but not the best average points per game with United bettering Liverpool’s 1.56 points per game.

Liverpool’s record is significantly boosted by the three impressive wins against Chelsea, Manchester United and Manchester City.  Indeed, under Dalglish’s guidance Liverpool have not yet lost a game against the top six sides with the three defeats coming when Roy Hodgson* was still in charge.

Of the six teams, Tottenham have played the least games with three out of their five remaining games being against sides who are in the top six.  Their average points garnered so far is encouraging for them, seeing that it stands at 1.43.

Arsenal’s inability against the other top sides is reflected by the fact that they’ve only recorded little more than a point a game.  Yet the side with the worst record is Manchester City who have lost four games and have a negative goal difference of five goals.

*   To be fair to Roy Hodgson, Liverpool would have won the first game against Arsenal if it weren’t for a late mistake by Pepe Reina whilst the defeat at Manchester City was characterised by Javier Mascherano’s late decision not to play.  It should also be pointed out that in four games against top six teams as manager of West Bromwich Albion, Hodgson has recorded two draws and one win (against Liverpool) which are exceptional results by a relegation threatened side.

More from Paul can be read on his blog www.aliverpoolthing.com.  His views can also be seen on Twitter at @paul_grech

For me, it’s not just the results in big games that have changed under Dalglish, but more importantly, there have been much improved performances.

Under Hodgson, Liverpool were terrible against Arsenal when it was 11 vs 11 in the first half, and abysmal at City for the entire match (yes, Mascherano pulling out was a blow, but losing one player before kick-off should not result in such a collapse; a far-from-necessary switch to a flat 4-4-2 didn’t help, either).

The Reds only came to life at Old Trafford when 2-0 down, and after a great first 30 minutes against Chelsea, there followed one of the most one-sided 60 minute spells seen at Anfield in favour of the opposition. Although the 2-0 victory over Chelsea was a great result, achieved with some determined last-ditch defending (and bad Chelsea finishing), the inability to get any kind of possession after the half-hour mark was concerning.

The Reds only really played once in a clear underdog situation: down to ten against Arsenal, and all-but-beaten at United. This ties in with Hodgson’s success at smaller clubs, like Fulham and West Brom, where he has enjoyed good results when clearly unfancied. A different mindset is needed at clubs like Liverpool.

Dalglish has been more positive in the games against Manchester United and Manchester City at home; at 2-0 up, the team did not get every last man behind the ball, but kept playing, and extended the lead to 3-0. Even though opponents can come back into any game, the Reds never resorted to an hour of panicked clearances and a constant nervous concession of possession.

Perhaps the key is that under Dalglish, Liverpool have controlled more of the big games, whereas under Hodgson, deep defending and counter-attacks were the order of the day. More than anything, Liverpool now have the right mentality for these occasions. 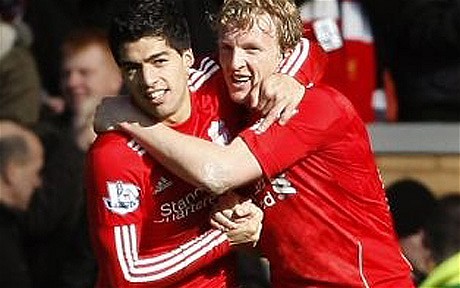