Now that the dust has settled, I thought it might be interesting to review some of the statistics from Liverpool’s Europa League campaign (excluding qualifiers), to see what can be learned, and hopefully to whip up some interesting debate. You might be surprised to hear in some regards they did well too.

The statistics certainly don’t make for pretty reading though. No away wins, five 0-0’s, and only scoring in four out of the ten games in total. The most sobering fact of all is that a fan travelling from Liverpool to the five away games will have clocked up approximately 12,200 miles in round trips at great expense, and their only reward in terms of goals to cheer was a Milan Jovanovic header in Bucharest. Clearly not good enough.

It’s quite interesting that the match facts closely mirror the league form in some ways:

Note – League stats up to and including Manchester United (home), as that was the last league game prior to Europa League exit.

A different breakdown of results perhaps, but almost identical points and average amount of possession per game. 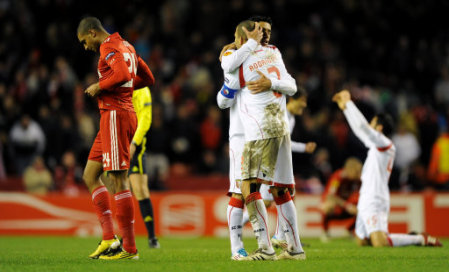