Simon Fear – pro-qualified referee and Tomkins Times member – takes an uncompromising and unbiased look at the officiating in games involving Liverpool in January 2011. Was luck for or against the Reds?

Liverpool faced a congested fixture list in January 2011, with five premier League games and an away trip to Manchester Utd in the 3rd round of the FA Cup.

This was the first time Mr Friend had officiated at Anfield since his promotion to the Elite panel of referees. The game followed a well known pattern of Bolton, despite the improvement in their football under Owen Coyle, remaining physically combative, and due to some lenient refereeing that allowed Cahill, Knight and Mark Davies to offend with impunity. The second obvious plan for Bolton was a concerted effort to provoke Torres with a series of challenges which whilst on occasions winning the ball often went beyond what should have been acceptable level of force as the striker was repeatedly fouled. It was somewhat surprising that Fabio Aurelio was the first player to receive a caution. The caution was correctly awarded as Aurelio made a reckless ‘scissor’ style challenge on Rodrigo from behind. Bolton took full advantage of the freekick as Kevin Davies headed in the opener.

The other major talking point of the first half followed yet another heavy challenge from Gary Cahill on Torres. Cahill challenged Torres from behind and despite clattering into Torres, Cahill ended up on the ground with Torres leaning over. There was an exchange of words before Torres grabbed Cahill’s face with one hand, pushed him, and turned and walked away. Mr Friend had already awarded Liverpool the freekick and had a decision to make. Under Law 12 – A player is guilty of violent conduct if he uses excessive force or brutality against an opponent when not challenging for the ball. There are no rules about the raising of hands, touching the face, etc … these are all typical myths that develop due to interpretation; however Mr Friend rightly decided that Torres’s actions did not amount to Violent Conduct. However, I am surprised that Torres was not cautioned for Unsporting Behaviour for ‘pushing an opponent’ regardless of the amount of provocation he suffered.

The second half saw Liverpool equalise after a wonderful pass from Gerrard was volleyed into the roof of the net by Torres. The game seemed certain to be heading for a draw until Joe Cole tapped in a controversial last-minute winner. Liv 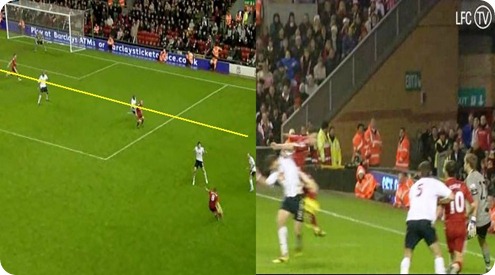 erpool had possession of the ball on the right flank, Gerrard delivered a superb cross to the back post yet at the moment he played the ball Cole is some two yards offside. (The yellow line on the picture is the offside line.) The ball goes beyond Cole and Maxi, who is onside, challenges Elmander at the back post. The ball deflects off Elmander and back across goal where Cole, still in an offside position taps home.

It is not an offence in itself to be in an offside position. A player is only penalised if, at the moment the ball is played by one of his team, he is, in the opinion of the referee, involved in active play by ‘interfering with play’ ‘interfering with an opponent’ or ‘gaining an advantage by being in that position’.

In this case Cole is not ‘interfering with an opponent’ when the ball is crossed (this is defined as ‘Preventing an opponent from playing or being able to play the ball by clearly obstructing the opponent’s line of vision or movements or making a gesture or movement which, in the opinion of the referee, deceives or distracts an opponent’).

At no time did Cole get back to an onside position. However, he was rightly not penalised and play was allowed to continue. As the play progressed, Maxi and Elmander challenged for the ball, and the Swede managed to get his body in the way of the ball; it rebounds of his hip (as shown in the picture) and travels back across goal where Joe Cole taps in from close range. Cole is still in an offside position and would have been penalised if Maxi had played the ball to him. However, the rules clearly state ‘the moment the ball is played by one of his team’ and in this instance the linesman made an excellent decision and the goal correctly stood.

The rest of this post, analysing the five remaining games, is for Subscribers only.