The following quote was recently sent my way:

“It was very hard to do it, it really was, because Roy was such a very, very nice man and full of integrity. But it wasn’t really happening, we weren’t progressing and the crowd was getting restless. They were. But mostly I didn’t feel the tradition was being upheld. There is such thing as the Liverpool way. That is the character of the club, and the supporters demand it.”

Except I’ve changed two words. And rather than sum up recent events, it dates back 30 years.

“It was very hard to do it, it really was, because Dave [Sexton] was such a very, very nice man and full of integrity,” says Martin Edwards. “But it wasn’t really happening, we weren’t progressing and the crowd was getting restless. They were. But mostly I didn’t feel the tradition was being upheld. There is such thing as the United way. That is the character of the club, and the supporters demand it.”

Who did Dave Sexton heavily influence? You guessed it, Roy Hodgson; the pair studied under the same FA coaching guru, Allen Wade, whose 1970s teachings inspired a litany of managers whose teams were organised but often horribly dour (at least when compared with those at the top of the tree).

Sexton’s league win ratio at United was below 40%. Sound familiar?

As much as things change and evolve in football, there remain many constants. Successful teams are defensively sound and often win the ball back as quickly as possible, but whatever the tactical shape employed to best achieve their goals, the ability to pass the ball better than the opposition (most of the time) remains crucial.

As one famous son of Liverpool put it to me, it’s no use ploughing fields with Ferraris – a perfect analogy, which is never clearer than in terms of what Fernando Torres was being asked to do.

And now we’re back to a passing tradition; the Liverpool way. It occurred not almost overnight, but literally overnight. It took one phone call, and one long-haul flight.

Though excellent passers in the halcyon days, the Reds weren’t always the prettiest team, and according to Bob Paisley the long ball could also be the right ball; but overall it was kept on the deck, and moved quickly. Of course, Paisley and Shankly were also innovators: introducing two mobile, ball-playing centre-backs into the British game in the early ’70s upon witnessing, first hand, the continental approach. Back in the ’70s Dalglish was the master of playing between the lines.

Can history repeat itself in other ways? We shall see. Failure to win against Fulham tonight might bring fresh doubts to some observers regarding Dalglish’s suitability, but the evidence on the four games to date is that his brand of football – a mix of old-fashioned and move, and a modern 4-2-3-1 system – makes far more sense than that seen earlier in the season.

For more of my observations in moving out of the dark ages, see yesterday’s piece for subscribers.

Thanks to Fulham fan Richard Allen of Craven Cottage Newsround (and TTT member) for passing the Sexton info onto me. 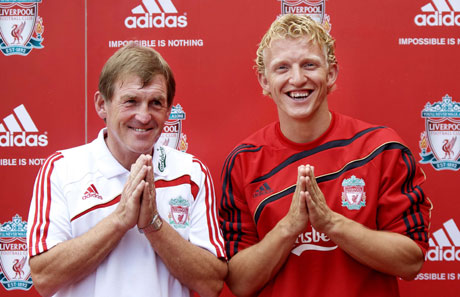 Out of the Dark Ages, Into the Light