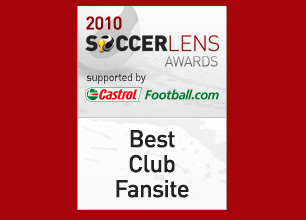 From The Soccerlens Awards:

The Best Club Fansite award celebrates those websites dedicated to a single club. It the ultimate populist vote, and this year saw Arsenal, Manchester United, Liverpool and Tottenham fans (amongst others) thrash it out for the title.

Despite the presence of heavyweights such as KUMB, Republik of Mancunia and Arseblog, we’ve gone for The Tomkins Times for the insightful news coverage and analysis of all things Liverpool. No one puts it better than the Independent when they called it “perhaps the most intelligent guide to Liverpool available on the internet”.

Paul has done a fantastic job, and while he may not win the populist vote, he gets ours for the best club fansite of 2010.

As I noted on Twitter, thanks to everyone who has supported the site in the past year.