Liverpool faced matches against Blackpool (H) Everton (A) Blackburn (H) and Bolton (A) in a series of games that they desperately needed to gain maximum points to lift themselves from the lower regions of the Premier League.

The game kicked off and Liverpool had an early opportunity to open the scoring when Fernando Torres delivered a cross from the right, Joe Cole was running into the 6yd box to meet the cross and as the ball arrived he was fouled from behind by Neal Eardley. The cross was perfect and Cole was within 3 yards of goal with what appeared a simple tap in.  As the picture shows Cole was challenged before the ball arrived and had both 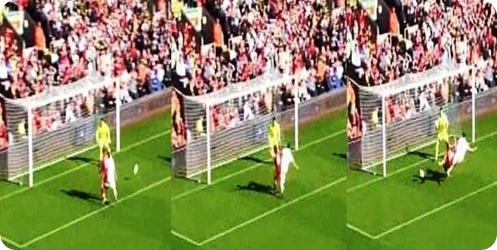 legs swiped from beneath him.