This week sees the long-anticpated (by at least three people) release of ‘Pay As You Play: The True Price of Success in the Premier League Era‘.

The Transfer Price Index website is now fully live, and includes extracts and links to order the book. It will also feature new articles based on the TPI work used in Pay As You Play.

Below is a bit more about the book, but before that, for Subscribers only, an extended piece about Liverpool’s Premier League travails that was omitted from the book due to space constraints.

• The concept of ‘genuine profit’ – i.e. profit made on a player after inflation is taken into account. You buy in one market, but sell in another; most often, one where inflation has taken place.

• Cost per point – how much each club’s XI (with inflation) cost each season, divided by points won. And on average, how much does it cost to finish as Champions; in the Champions League; mid-table; and above the relegation zone.

• Managers and clubs punching above and below their weight. Who are the best and worst?

• ‘The Newcastle Effect’ – the difference between small and big club management, and why so many managers (mostly British) fail to translate their ideas to higher-pressure jobs.

• Squad Cost vs XI – which has more effect on success, and why. And what role does utilising your squad to greater or lesser amounts play?

• Competitive balance in the Premier League era; how ‘fair’ is the league? – industry and economic analysis used to show the change in fairness as time passes.

• Cost of players in relation to age, position and nationality, and a look at why. And how will the Uefa Financial Fair Play Rules affect this?

• A look at the number of trainees graduating into the senior sides, and the trends across the 18 full seasons to date. Do more make the breakthrough now, or are the numbers declining?

• ‘Dead Dreams’ – a look at Leeds United and Portsmouth’s financial implosions, and the effect of overspending.

Part Two: takes a look at all 43 clubs to play in the top flight between 1992 and 2010. Included in each section, following an overview of achievements/talking points and a statistical breakdown of the team and its managers, are the views of an ‘expert’ on that particular club. These include Gabriele Marcotti, Jonathan Wilson, Oliver Kay, Daniel Taylor, John Ashdown, Nick Szczepanik and Anthony Clavane; plus fanzine editors and highly-regarded bloggers, such as Zonal Marking, Equaliser Blog and Swiss Ramble.

Part Three: looks in detail at all 18 seasons – the big transfers, the trends in spending, and any external financial factors, such as new TV deals.

Part Four: is primarily a look at the major managers of the Premier League era, with a full breakdown of their transfer activity, and a look at what percentage of their own spending was recouped in sales. It also contains the Conclusions section, and finally, a list of the 200 most expensive transfers in 2010 money.

The book is available to most retail outlets through the UK’s leading wholesaler. But that doesn’t mean all shops and bookstores will all have it in stock. The wholesalers also distribute internationally, but again, it’s down to retailers to order; some will, others won’t. Should they not have any in stock, they can always request them on your behalf.

The book is also available in Kindle format on both UK and US Amazon Kindle stores, and within 2 weeks, an eBook/iBook version will be widely available through all the online outlets listed here . Kindle books are also readable on iPad and iPhone with the Kindle app. 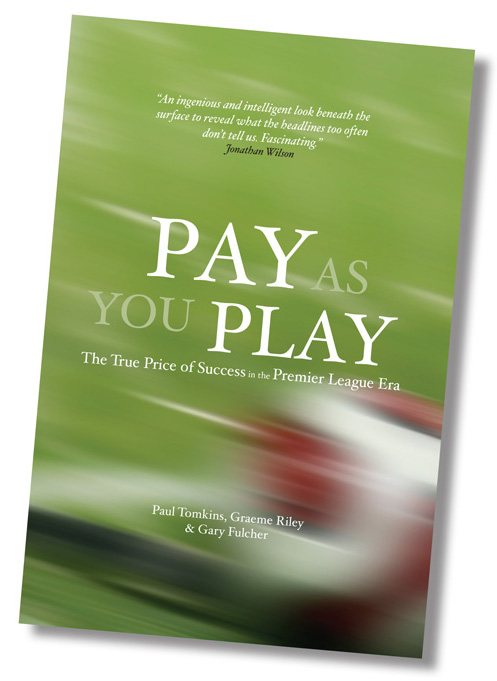