First of all, it nearly never happened. John W Henry sent me a message more than a week ago to give him a call, but as it was from a Facebook account with almost no activity, I assumed it was some kind of hoaxer. So I ignored it, as you do. 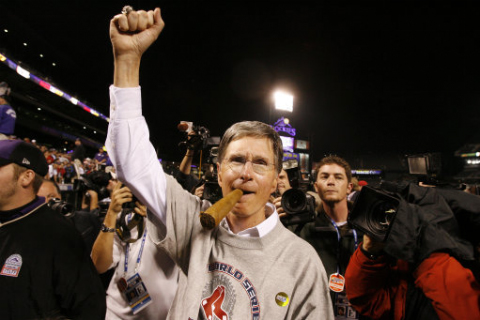 It was only when he began to follow me on Twitter a number of days later, with that site’s particular notification message coinciding with an email from a ‘John W Henry’ a couple of minutes later, that I realised it was the man himself.

He got in touch as, having tried to find out as much as possible about the club many months ago, he ordered a whole stack of books from Amazon. I don’t know what he thought of the others he read, but he liked mine.

So, at his request, we went out for lunch, to chew the fat (and too chat, too…). At the end, the chefs and waiters of restaurant queued like nervous teenagers to ask for his autograph. Of course, I was totally ignored. I was half-expecting them to ask him “So, John, why are you having lunch with Moby?”

Softly spoken, but as sharp as a tack, his politeness and humble nature were as I’d expected from reading up on him during the takeover.

I know some of the SaveLFC guys who met with him a couple of weeks back, and they said he even carried the drinks. He’s that kind of guy. When I emailed him a PDF of my new book in reply to his initial contact, he was genuinely thankful, as if I’d emailed him my new born baby converted into binary. In person I experienced no obvious ego, but a great belief in winning. If I had to sum him up in two words, I’d say ‘quiet confidence’.

That he also met with SOS is another great sign; the fans are being engaged in the process, if not exactly ‘running’ the club. I can’t compete with those guys for local knowledge and hardcore fan passion, but I have my own unique take on the game (and a method with numbers) that John W can obviously relate to.

He said he wanted my thoughts on NESV’s ideas for the club; not to get involved with them, merely to see what my reaction was.

Now obviously, it’s not my place to explain what they are before they are in a position to do so – and some are purely theoretical at this stage – but my reaction was one of great encouragement. It sounded eminently sensible. Nothing flashy, nothing silly, nothing to try and woo the fans; above all else, no false promises. And I’m sure there’s lots he didn’t tell me, too. But I got the feeling this is now a club that can keep its best players, and add young, hungry, up-and-coming top-class talent to improve the team.

(As I am about to hit send to publish this piece, Damien Comolli – former Arsenal scout and the man who signed many of Spurs’ better players, and who shares NESV’s ‘Moneyball’ vision – has been appointed, presumably as Director of Football. I knew from yesterday that something like this was going to happen with regard to overseeing transfers, but only joined the dots earlier today when Comolli quit his post at St Etienne.)

No-one can predict the future, and John W accepts that a few mistakes may be made along the way – who doesn’t in football? – but I liked what I heard. Success cannot be guaranteed, but the club will be much better run from now on. Most importantly, the Gillett and Hicks acquisition debt has been cleared, so the club is no longer hemorrhaging money.

The primary aim has to be to undo all the bad work of the previous administration, and that is the biggest part already taken care of. More will follow. But it’s building up again from a base, after the previous owners almost razed the club to the ground.

It’s clear that NESV don’t have the insane kinds of money some of our rivals possess – those ‘super-benefactors’ – so it’s about being clever; as they were with the Red Sox, in ending 86 years of ‘hurt’ as we say in this country. But football over here is a more unequal system, and he’s still trying to get his head around how differently players’ contracts are treated (and honoured) over here.

Let me be clear: I’m not interested in doing his PR. Go and read anyone else’s experiences of the man, and you’ll find the same. And he never asked me to. As loathed as Hicks is in US sporting circles, Henry is admired. You don’t need me to tell you that. And I don’t want to get involved on that level.

Because, as fans, our experience with Gillett and Hicks tells us that trust has to be earned; watch what people do, not what they say. That said, having been told of a couple of things they’ve already done behind the scenes, I have to say, they mean business.

But this big week is just the start.

Liverpool vs Chelsea - The Good, The Bad & The Ugly