I used to think that ambivalence was another word for indifference. Instead, I now understand that it is more of a simultaneous pulling and pushing. Therefore, ambivalence sums up how I feel about Rafa Benítez’s inevitable leaving of Liverpool. Rather than not caring either way, I care both ways.

On the one hand, I believe him to be one of the very best managers in the world. On the other, the situation at Anfield was clearly not healthy, and the more blame that was ludicrously pinned solely on the manager then the harder it would be for him to do his job, and for the players to trust him.

So it is leaves me incredibly sad, angry and frustrated; but also, in part, relieved.

Much of the part of me that pulled in the direction of change came back to the unending bullshit that surrounds Rafa, and his methods. I’m not sure I could have stood another season or two of Andy Gray and Richard Keys’ desire to belittle him and point-blank refuse to show stats that show anything in his favour, or the endless, excessive attacks from hacks who know precious little about the sport by comparison. From a purely selfish point of view, I was tired of it all. They weren’t going to stop until they had their quarry.

I’ve said it before, but as soon as people criticised Benítez for blowing the title in 2008/09, despite finishing with 86 points and just two defeats (and top scorers), then in many people’s eyes he was always going to be a failure, no matter how well his team did. His critics pointed to some drawn games, as if no top side ever dropped points here and there mid-season.

Therefore, I didn’t necessarily foresee a rosy future with Rafa at the helm; I just felt he deserved better after one bad season. In Shankly’s era, even after seven seasons without a trophy and an average league position similar to recent years (and one campaign where a measly 42 goals were scored), the manager would have been backed and the finances given to reinvigorate the squad. But when funds are tight, the easy way out is to sack the manager, cross the fingers and hope for the best. It’s even easier when a scapegoat is being sought by greedy owners.

No matter whose fault it is, a situation can get to a stage where the only point of return is via serious compromise. And once people start compromising, their ideas get diluted. I had no desire to see Benítez remain as a lame duck manager, as many would have seen him. After four transfer windows where he’s had to trade for a profit, the cost of the squad was diminishing all the time, while the ‘free’ stars he inherited – Gerrard and Carragher – were getting older.

Either he was supported to do the job – which I believe he should have been – or he wasn’t. Anything in between suggests a mess. Of course, perhaps the way the club is heading has got to the stage where nothing but a mess can be expected, regardless. I envisaged the media’s frenzied clusterfuck after a draw on the opening day of next season, and the whole debate going into overdrive once more.

Let’s be clear: some players may have had a valid beef with Benítez. Relationships between managers and players fail all the time, and every manager makes mistakes with how he handles his charges (Alex Ferguson launching a boot at David Beckham’s face?). Not everyone can be happy at once: when Babel was out, he was pissed off; when he came in and played at the end of the season, Benayoun was pissed off.

Other players may simply follow the crowd, and try to obscure their own lacklustre displays behind a supposedly failing manager. That’s what some footballers are like.

A new manager can give players a clean slate, whether or not they deserve one. But a new manager almost always needs his own budget, to do things his way.

And in this case, a new manager will inherit the one side of things that, given it was not dependent on megabucks, was heading in the right direction: the Academy. Last summer, Benítez finally got his men in place, with two key appointments from the famed Barcelona academy. Will this development endanger that? Will those Spaniards remain? 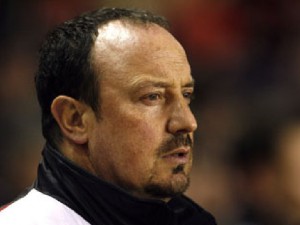 I honestly had little desire to meet Rafa before he invited me, out of the blue, to Melwood last autumn. I always felt it best to keep my distance, rather than push for a meeting through my column on the official site (which, incidentally, I’ve not given up, but for which I feel utterly unmotivated to write right now, given that the core problem – Gillett and Hicks – is something I cannot really broach).

Of course, the invite, when it came, was too good to turn down, and I wouldn’t change that. But it did leave me feeling slightly compromised; knowing the manager to be a decent human being, and not wanting to be disloyal in an age of fickleness, made my job harder (but simultaneously, with the connection made, far more interesting).

I also didn’t want to see Benítez’s reputation disappear down the drain on the back of a club now existing simply to pay off debt. He deserves better. And a number of Europe’s top clubs will see past the nonsense he’s had to deal with, and recognise a major talent.

If Benítez deserves better, so do Liverpool fans; even the deluded ones (well, most of them). We deserve a club that isn’t haemorrhaging money at a dangerous and alarming rate. In the face of that, arguments about tactics and formations start to seem utterly redundant.

Despite the financial mess, expectations will remain rooted in the 1980s (when the Reds were as rich as anyone).

But as my recent pieces have shown, the club is simply unable to be perennial title challengers; if anything, 2008/09 spoiled us. It made us dream again. (As did Istanbul.) I’d be genuinely shocked if Liverpool are in a position to post an 86-point season anytime soon, and that’s not the fault of Rafa Benítez. Or, for that matter, make it to one, let alone three Champions League semi-finals, two of which were won, in quick succession.

(As an aside, based on the Times’ Fink Tank column, Liverpool should have been getting 64 points each season based on recent wage bills. Therefore, last year the team under-performed by just one point; others, such as Spurs and Villa, over-performed. However, the season before, the Reds over-reached by a whopping 22 points.)

So where will this leave Liverpool? With a temporary manager, hoping that the club is sold in 2010, if we’re lucky? With players not knowing where they stand, and neither the money nor stability to attract the really special talent in the summer window?

Maybe someone good will end up in the job; it’s still “Liverpool FC” after all. But the underlying problems will remain. This season, Benítez ended up like a juggler performing on an earthquake. Maybe someone else can keep the balls in the air while the ground beneath them crumbles; but it’s unfair to expect it.

Maybe Kenny Dalglish will step in and give the place a lift. But he won’t be at a club run as well or as used to success as the one he last managed between 1985 and 1991, nor one as rich as Blackburn, with whom he enjoyed his last success, some 15 years ago. If anything, he probably has more to lose than gain (see Kevin Keegan and Howard Kendall for disastrous returns; I’d hate to see Dalglish sully his reputation in that way).

Finally, I’d like to thank Rafa for his hospitality last year; for getting us closer to a title than at any time since I was a teenager; for an FA Cup success that involved beating several Premier League teams along the way, including Manchester United and Chelsea; but most of all, for Istanbul, the one thing that will last with us forever – the best day of our lives.

I will also obviously be discussing the issue with Subscribers to the Tomkins Times.