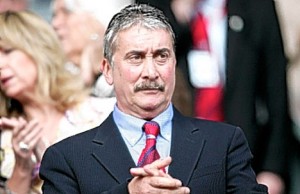 In your letter published in The Times this morning you attempt to explain the process that led to the sale of Liverpool FC to Messrs Hicks and Gillett. This was welcome if not overdue. I would, however like to take issue with some of the statements made in that letter.

You precede your comments on the search for a new custodian with the words ” I don’t really care whether the supporters like me or approve of me – but it’s important that they believe me” but you then go on to suggest that pressure to sell from a “loud minority” of fans played on your mind and influenced your behaviour when scrutinising the Hicks / Gillett bid.  For a man in your position to attempt to explain the lack of proper interrogation of new owners because of minority fan pressure for a quick sale is simply shameful.  Not content with passing the buck for the decision onto the fans you also suggest that minority shareholders, including Granada and Steve Morgan, were similarly taken in by the Americans.  The problem of course David is that those minority shareholders, like us fans, believed that you and Rick Parry had done all the due diligence, that you had checked these guys out.  I mean you must have done surely, after all Rick Parry said:

“This is great for Liverpool, our supporters and the shareholders – it is the beginning of a new era for the Club. The partnership created by George and Tom is very special. They are bringing to the table tremendous and relevant experience, a passion for sport, real resources and a strong commitment to the traditions of Liverpool. Their approach represents exactly the sort of genuine partnership that Liverpool has been seeking over recent times. We know that George and Tom want a long-term relationship with Liverpool and that they also understand the importance of investing in our success both on and off the field. They have made clear their intention to move as quickly as practicable on the financing and construction of our proposed new stadium at Stanley Park and also to support investment in the playing squad. This has been an important time for the Club. We now have the right partners for the future. I am absolutely certain we have now ended up in the right place, with owners who will help the Club succeed and prosper.”

Do you not think that glowing testimonial might have been one of the reasons that the fans were brought onside and the shareholders voted unanimously to accept David?  We were taken in because David Moores and Rick Parry told us that after a long search they had found the right people for the club.  We trusted you.  We trusted that you had done all the right checks and asked all the right questions.  We trusted you because you were in a position of trust.  You let us all down.

Despite earlier promises that you would dig deep into every file and ask all the tough questions, when it came to Hicks you let it swing on the word of his co-investor and a bank report that said they were “good for the money”.  It seems that far from asking the tough questions you never even asked the obvious ones. Questions like “How do the supporters of his other sports franchises view him and his contribution to their club?” and “What is his record of burdening his other sporting acquisitions with the purchase debt?”

Unfortunately David, for someone who starts out by saying “I’m writing to you not out of any mission to clear my name – if I felt I had anything to apologise for I would have done so, without hesitation, a long, long time ago” the rest of the letter reeks of a man attempting to justify his decision and to pass the blame onto anyone else possible.  That is not acceptable.  That is not what is needed at this juncture.

I think most Liverpool fans accept that these mistakes were “honest mistakes”.  We are not alleging malice, or even greed. As you say “It is a sign of strength, not weakness, to concede for the greater good”.  So accept that those honest mistakes were yours and apologise for them. People can forgive an honest mistake as long as their is contrition and a desire to make it good.  What is done is done, there is a far more important battle to be fought, a battle that should not be sidetracked by recriminations over past events.

You speak movingly in your letter about the principles that unite us a Liverpudlians. You now have the perfect opportunity to back up these fine words with support, public and financial for SoS and ShareLiverpool.  Let your actions now speak for you. Anything less and we will be forced to conclude that your protestations to the current owners is nothing but bluster.

Throw your support behind the campaign to get the Americans out.  Help to underwrite a fans buyout.  If you want to rescue your family name, which despite your protestations to the contrary, it is obvious you do, then that is the only way that you will do it.

[I share a lot of Kev’s concerns, as listed above, but ultimately it’s helpful that Moores adds his voice to the criticism of G&H and keeps pressure on them headline news. However, there is more that Moores could have said, and more that he can still do – PT.]