Usually writing articles for Subscribers only, TTT’s resident Pro referee Simon Fear offers a special look at the many incidents from last night, as well as that pesky rule book.

Liverpool faced a tough task against a rampant Benfica at the the Stadium of Light. Benfica are enjoying a great season in which they are dominating the Portuguese league as well as making exciting progress, including a 7 – 0 aggregate victory over Everton, in the Europa League. The match referee was Jonas Eriksson from Sweden, and his four assistants were all fellow countrymen.

The game was played with an imposing noisy home crowd and there were a large number of incidents which were resolved with decisions that on occasions were correct, on others were incorrect – some lenient, some harsh. However, it’s fair to say that the match officials were not helped by the home crowd who were throwing thunder flares onto the pitch and clearly intent on creating an environment of intimidation. 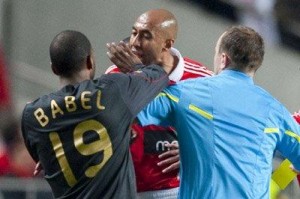 In the 28th minute there was a foul and sending off; however, the Babel red card cannot be judged without considering the extent of the foul by Luisao on Torres. The ball was rolled up the line by Insua where Torres controlled before being fouled by Luisao.

The challenge was deliberately forceful and intended to leave its mark on Torres. Luisao clearly had no way of playing the ball without going through Torres, and appeared intent on coming through the back of the Liverpool striker. He succeeded in doing so, connecting with both legs and following through with an excessive amount of force. The referee immediately awarded the free kick, and, whilst in the process of dealing with the incident, Babel became involved in a verbal argument with Luisao. For some unknown reason, Babel lifted his hand to the face of Luisao on two occasions, before the players were separated.

There was no great force in Babel’s actions – however, it was deemed to be violent conduct and Babel was sent off. (A player is guilty of violent conduct if he uses excessive force or brutality against an opponent when not challenging for the ball. Referees are ‘reminded’ that violent conduct often leads to mass confrontation, therefore they must try to avert this with active intervention).

Nowhere within the laws of the game or any FIFA guidelines is there any mention that raising the hands in the manner of Babel is deemed violent conduct – however, it has almost become an accepted example by practice. Is the ‘unwritten rule’ daft? Absolutely – but Babel’s lack of discipline was at fault, and by raising his hand to the face of Luisao he gave the referee (who appeared nervous and intimidated) a decision to make.

Luisao escaped with just a caution for a challenge that, whilst deliberate and intentional, was in the area of discretion for a referee. Mr Eriksson could easily have seen this as serious foul play.

But by only cautioning Luisao, the ref decided it was ‘reckless’ and not deliberate. Personally, I feel that this challenge was so clearly intended to harm Torres that a red card should have been issued; however, the referee does not have the advantage of seeing that Luisao had no possibility of playing the ball without first scything through Torres, and I believe this led to yellow instead of red.

In the 36th minute there was a disallowed goal by Liverpool, correctly ruled offside by the linesman. As Gerrard delivers the ball, Kuyt has moved into an offside position. The margins are fractional but his upper body is ‘active’. The definition for offside includes: A player is offside if he is nearer to his opponents’ goal line … ‘Nearer’ is defined as ‘Any part of a player’s head, body, or feet’. Unfortunately, Kuyt leant forward and into an offside position and the flag was raised when he became active as he jumped and challenged the defenders and goalkeeper for the ball.

In the 44th minute, the ball is moved to Aimar who knocks the ball past Insua and towards the goal line. As he runs alongside Insua, the Argentine defender momentarily grasps and then releases Aimar’s left arm. The contact was absolutely minimal and would have had no effect on Aimar’s progress;  however, the linesman, not the referee, awarded a free kick and Insua was harshly cautioned meaning he is suspended for the return leg. The deliberate trip by David Luiz on Torres in almost identical circumstances in the second half that resulted in a free kick but no second caution only added to Liverpool’s frustrations. 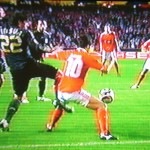 In the 57th minute, Benfica were awarded their first penalty when Insua was judged to have fouled Aimar in the penalty area. Cardozo had fired a stunning free kick against the post, the ball rebounded with such force that it struck Mascherano and bounced towards an unmarked Aimar. Insua, played into a tough position, attempted to clear the ball before it reached Aimar, but the former Valencia striker used his experience to position his left leg to control the ball and is clearly fouled by his compatriot. Whilst the incident followed a trail of misfortune, it was a clear penalty.

The second penalty was awarded in the 77th minute as Di Maria beat Johnson and cut in towards the goal line. Carragher threw himself at the ball in an attempt to prevent the cross and as he slid his left arm was outstretched, away from his side and raised. Di Maria cut the ball back and there was clearly a handball, but again the question has to be about intent. 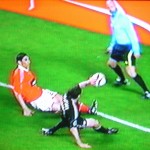 Law 12 states: ‘A penalty is awarded if a player deliberately handles the ball’ – if it is deemed a deliberate act of a player making contact with the ball with his hand or arm. FIFA guidance adds that the referee should take the following into consideration when deciding on deliberateness: (1) The deliberate movement of the hand towards the ball (2) The distance between the opponent and the ball (3) The position of the hand does not necessarily mean that there is an infringement. I believe that, considering how close Carragher was to Di Maria, the fact his arm was raised prior to the ball being crossed, and thus not moved towards the ball (momentum carried him forward on a wet surface), it was an incredibly harsh decision.

These incidents apart, the referee looked uncertain throughout the match, he failed to protect player welfare (he has a responsibility to protect players) and allowed systematic fouling of Torres. He also seemed to allow Benfica to foul with impunity by not cautioning players (Luisao committed a further four fouls after his caution and David Luiz made three more), and by his lack of control and punitive action he encouraged and condoned Benfica’s aggressive tactics. Both Luisao and Luiz deserved additional cautions for persistently infringing the laws of the game or unsporting behaviour.

Finally, the behaviour of the Benfica fans in throwing thunder flares was reprehensible. The smoke, sound and heightened intimidation clearly and understandably unnerved the additional match official. The referee rightly stopped the game on two occasions and a public announcement was made to fans – but don’t expect UEFA to act with any real authority. This will undoubtedly be mentioned in the referee’s report, and the UEFA match delegate could not have missed it; however, this is one of those incidents where UEFA will talk tough but end up issuing an insignificant fine. 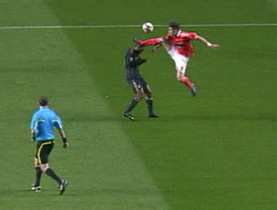 Note from PT: Simon neglected to mention several other incidents – after all, there were too many to keep up with – but this picture also tells an interesting story. Obviously, as can be seen in the image, the referee had about 15 players obscuring his view, hence he couldn’t be expected to give a free kick, let alone a card…

It also seems that Aimar was offside from the free kick that led to the first penalty, but this falls into the first and second phase argument.