Liverpool extended their un-beaten run in the Premier League to eight games (three wins, five draws) following the 0-0 draw at Swansea City last Sunday and that un-beaten sequence will be put to the test with the visit to White Hart Lane on Wednesday evening to face Andre Villas Boas’ Tottenham Hotspur, kick off 7.45pm UK time. 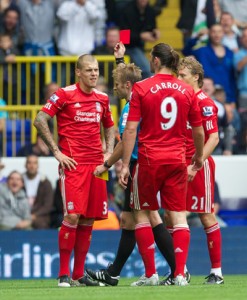 Spurs enter this fixture on the back of a 3-1 win over West Ham United at White Hart Lane but have lost four of their last six Premier League games, including two defeats at the Lane against Chelsea (2-4) and Wigan (0-1). Liverpool have won just one of their six away games in the league this season; an emphatic 5-2 victory over Norwich City back in September.

Fabio Borini (foot), Martin Kelly (knee) and Lucas (thigh) are all ruled while Andre Wisdom (knee) is a doubt for Liverpool.

Scott Parker (Achilles), Benoit Assou-Ekotto (knee) and Younes Kaboul (knee) are all absent through injury for Tottenham while Emmanuel Adebayor is suspended.