Did Liverpool’s Goals In March Show The Birth Of A New Front Three?

Did Liverpool’s Goals In March Show The Birth Of A New Front Three?

April 14, 2021 In By Andrew Beasley, Statistical Analysis, Subscribers Only, The DNA of Liverpool's Goals

In months gone by there have been so many goals scored by Liverpool that they haven’t all been mentioned in the Goals DNA round-up articles.

But due to their early FA Cup exit and the international break, the Reds only played four times in March, and offered up just three goals for this analysis. Slim pickings.

Fear not, there are still several points of interest, and we’ll also be taking a look at the two goals the Reds conceded (which we don’t normally do), as there are aspects to them which have troubled Jürgen Klopp’s side throughout the campaign.

And if we go through the strikes in chronological order then we’ll start with a downer but finish on the up. The goals against were two negatives and right now we need three positives.

Up to the afternoon of April 9th, Liverpool had completed the most long passes in the Premier League this season (per FBRef) while conceding the fifth fewest. They average the second most possession in the division, explaining some of the difference, so let’s invent ‘long pass possession’ and see what it tells us. 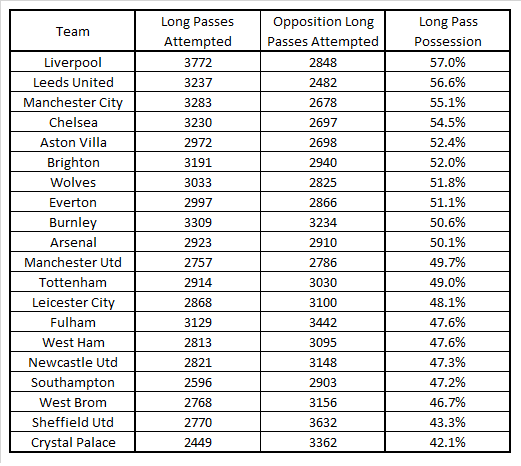