Liverpool have a phenomenal defensive record in 2019/20. The Reds have only conceded 15 goals in their opening 25 league games, which makes it the club’s fifth best ever season on a goals-per-game basis. One of the four better was last season, illustrating the consistency of performance Liverpool’s back line has enjoyed since Alisson Becker joined the club.

If the Reds were only to concede four goals over the rest of the campaign – which sounds unlikely, but they have to face 10 of the 12 lowest scoring teams in their final 13 matches – then it would be the best two season run for not conceding goals since the club began.

Whether they can manage it or not, Liverpool have rarely been harder to score against. Virgil van Dijk takes the majority of the plaudits, but the first choice goalkeeper isn’t far behind.

Alisson Becker has saved 50 of the last 54 shots on target he has faced in all competitions (93%). Absolutely flawless again today. #LFC

His record in the Premier League this season has been absurd. The Brazilian has faced 46 shots and only conceded six goals, giving him a save percentage of 87, when the average in 2019/20 has been 69. Remove Alisson’s figures from the league total, and the average for the whole division drops by almost half a percent. He has been that good.

Or has he? It’s worth taking a closer look at the figures, and some video footage, which will reveal the influence of the team and the fickle finger of lady luck too.

Being Liverpool’s goalkeeper is not one of life’s most heavily worked positions. A Premier League team has allowed 4.4 shots on target per match this season; Alisson has faced 2.8 (per 90, to account for his two shorter appearances).

Factor in the quality of the chances he has faced, and his job looks even easier. The average expected goal value of a shot in England’s top division has – according to Understat – been 0.11 this season. Of the 46 shots on target faced by Alisson, only eight (17% of them) have been of above average value. Here are the top 10 by xG rating, five of which have been scored.

On average, a shot which has beaten Becker has had an expected goal value of 0.35, and those which he has saved have only been worth 0.07. If you feed the on target shot xG values into Danny Page’s xG simulator, you find there’s a greater probability that the total number of goals scored is more likely to be three (16.2% chance), four (21.1%) or five (21.4%) than the six (15.8%) the big Brazilian has actually conceded.

What a fraud, eh?

No. Of course not. For starters, data from InfoGol shows that shots on target faced by Liverpool have been of lower value than the basic xG would suggest. This is measured using xG2, which they define as:

Post-shot expected goals (xG2) is what happens when the ball leaves the shooter’s head or foot, think of it from the angle from behind of the net or the view of the goalkeeper. The power on the ball, the placement (top or bottom corner) and swerve are all taken into account, thus allowing us to calculate who the league’s best finishers are, and which team’s defence impacts the xG2 the most.

Mark Taylor of InfoGol recently tweeted to show how Liverpool’s impact upon opposition xG2 has been significant this season.

.#LFC 10 game rolling xG & xG2 created follow hand in hand since 2018. xG & xG2 allowed does the same until this season when the on target opportunities that get through to Alisson/Adrian drop like a stone. How? Why? Huge reason #LFC are 22 points ahead of #MCFC Data @InfogolApp pic.twitter.com/izpJ9NNsPf

So although Alisson’s save figures aren’t actually all that impressive considering the quality of chance faced, he’s simply part of a defensive unit which collectively prevents opposition teams having high quality chances more often than not. This can also be evidenced by the fact the Reds have conceded the fewest Opta-defined clear-cut chances in the Premier League this season: 35.

There’s little in it at the top end though, with Manchester United (on 36), Wolves (37) and Tottenham (38) tucked in just behind. However, when you consider the average xG value of a non-penalty clear-cut chance is 0.39, you see on the above table that Alisson has faced very few of them, and it would be wrong to assume Adrián saw the rest.

While Liverpool don’t concede many golden opportunities, weird things happen when they do. Namely, the opposing attackers miss the target far more often than you would expect.

Only 14 of the 35 big chances against Liverpool in 2019/20 have been put on target. This accuracy rate of 40% is way below the league average of 69%, and this is vitally important as an on target (non-penalty) clear-cut chance is converted 62% of the time. As clear-cut chances account for 53% of the total expected goals the Reds have allowed this season – from just 15% of the total shots – such a high proportion of them not even testing Alisson or Adrián has been hugely beneficial.

Plotting the opposition CCCs on a pitch map really highlights the point. As per Stats Zone colours, yellow are goals, blue are saved, red are off target and gray are blocked. 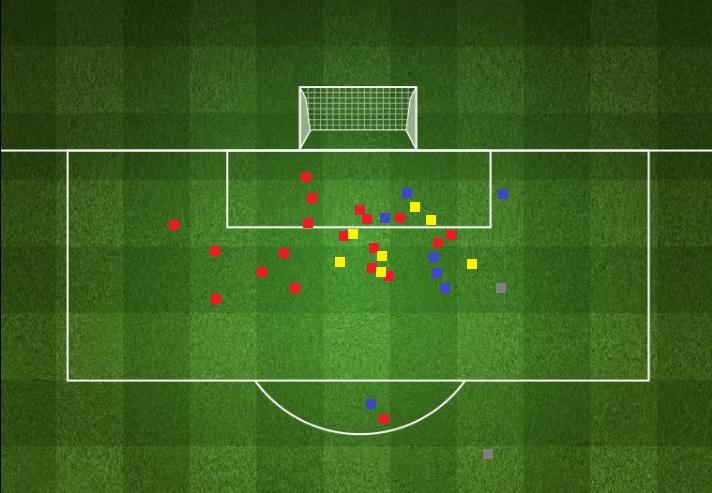 The patch of red on the left of the above image is part of a wider trend for Liverpool’s opponents with regards to all shots, as highlighted recently by James Yorke of Statsbomb:

Liverpool's defensive record is provoking a lot of debate. A small contribution; look at the zone highlighted, basically Liverpool's RCB zone. Around 40-45 shots, TWO on target. An Alderweireld header (saved) and a Richarlison goal. That's ALL SEASON pic.twitter.com/QpiM9sRcEW

Weird, isn’t it? And it makes one wonder if Liverpool have been incredibly fortunate this season and are heading for a crash at the back. Take a look at the following table from InfoGol. It shows the difference between xG and xG2 for Premier League teams at both ends of the pitch. The Reds’ red bar in the defence column is absurd. 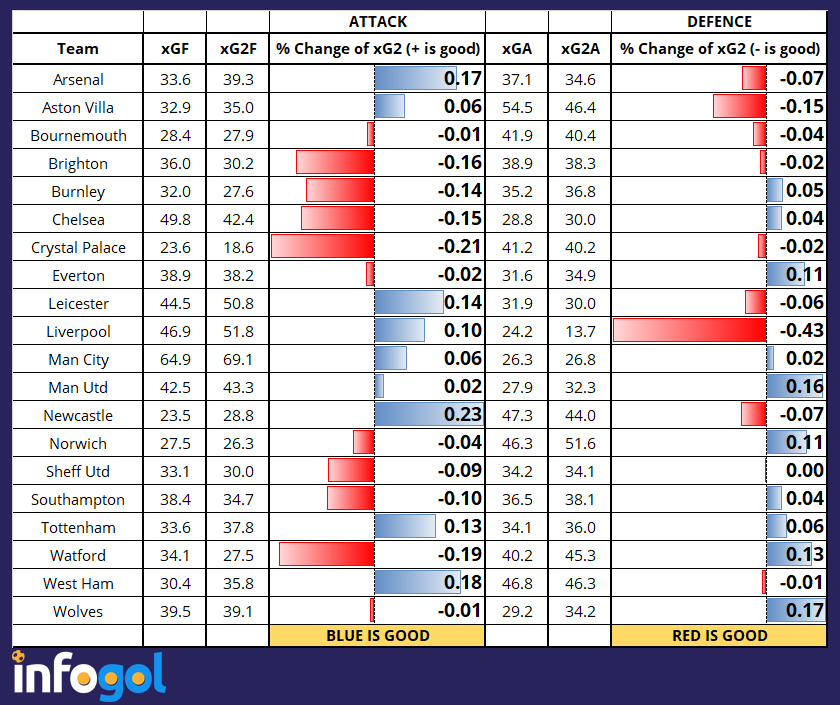 The rest of this analysis, featuring in-depth stats and video clips, is for Subscribers only.

Free Friday: Game State Theory and Milner Does Not Melt!

Who Were Your FIVE Best Players Versus Norwich?