January 14, 2020 In By Andrew Beasley, Statistical Analysis, Subscribers Only

Regardless of what other trophies Liverpool pick up this season, debate will forever rage among Kopites about whether this is their greatest ever team or not. Cases will be made for the title winning sides of 1978/79 or 1987/88 – with the age of the fan arguing perhaps as big a factor as any – but following their 1-0 win at Tottenham, the current crop have done something none of their predecessors ever did.

They became the first English team to earn 104 points from a 38 game run, they are the only side in Europe’s top five leagues ever to win 20 of their opening 21 matches in a season, and they are the only ever Liverpool team to go 38 league games in a row unbeaten.

Purists will argue it isn’t a true invincible season, as it has been split across two campaigns. It has resembled a regular season reasonably well though, with a home/away match split of 20-18, and 11 matches against the rest of the big six and Everton when normally it would be 12. Here’s how the Reds have fared against each of the 22 teams they’ve faced in their last 38 league matches. 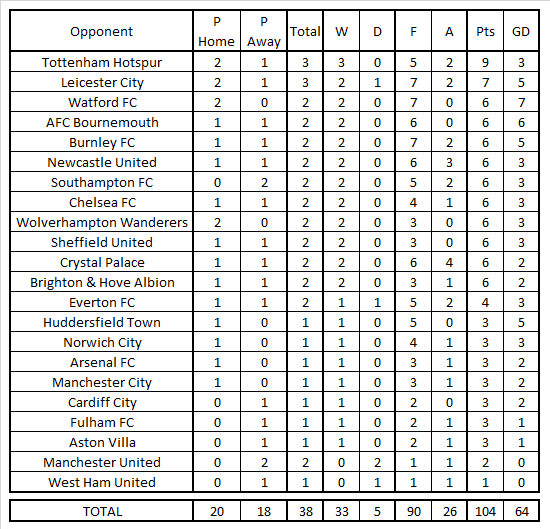 Regular readers of my data visualisation round ups will be aware that Liverpool have deserved virtually all of their results, be they good or bad, over the last two seasons based on the underlying expected goal statistics. So the following chart won’t be a surprise, but it’s still interesting to see the unbeaten run presented in full.