Statistics correct as at 25th January 2020

Liverpool appear to have an unassailable lead at the top of the Premier League. Their double digit points advantage sees forecasting models and bookmakers rate their chances of ending their 30 year wait for the title at 99 percent; indeed, some bookies have paid out already.

Yet long before Jordan Henderson does a tippy-toed trophy lift or the title is even mathematically certain, rival fans are trying to undermine the achievement by suggesting the Premier League is weak at the moment. It’s natural for supporters of other clubs to snipe, but it’s also part of the British psyche; as a nation we’d rather herald the efforts of a gutsy but unsuccessful underdog than praise a deserving winner.

And more importantly than anything else: who cares? Were Leicester and their fans bothered that the big clubs underachieved in 2015/16, allowing them to win the league? Of course not. Kopites won’t give a jot about how strong the league is should their heroes bring their three decade league title drought to an end, and nor should they.

Even so, the response from Liverpool fans on social media has been predictable enough, as they try to illustrate that the league is, in fact, about as strong as it has ever been. This has been done by showing that the points’ tallies by the various positions are line with historical trends. 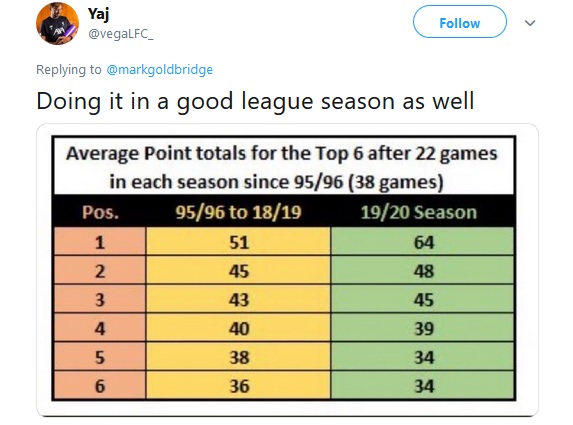 A Twitter thread comparing the points standings from 2019/20 with 2003/04 and 1998/99 even went viral. However, assessing one season against another by looking at points tallies overlooks the fact there will always be points tallies. Whether a division is comprised of 20 era-defining teams or 20 Derby Countys from 2007/08, games will be won and lost, and the teams will be lined up along similar lines every season, as some will win more than others.

To get a better idea of the strength of a league at any one point, we need to assess the strength of the teams within it. Kev Hegarty did this by looking at Five Thirty Eight’s Soccer Power Index scores. He found the Premier League has the highest average of any of the 34 leagues in their database. 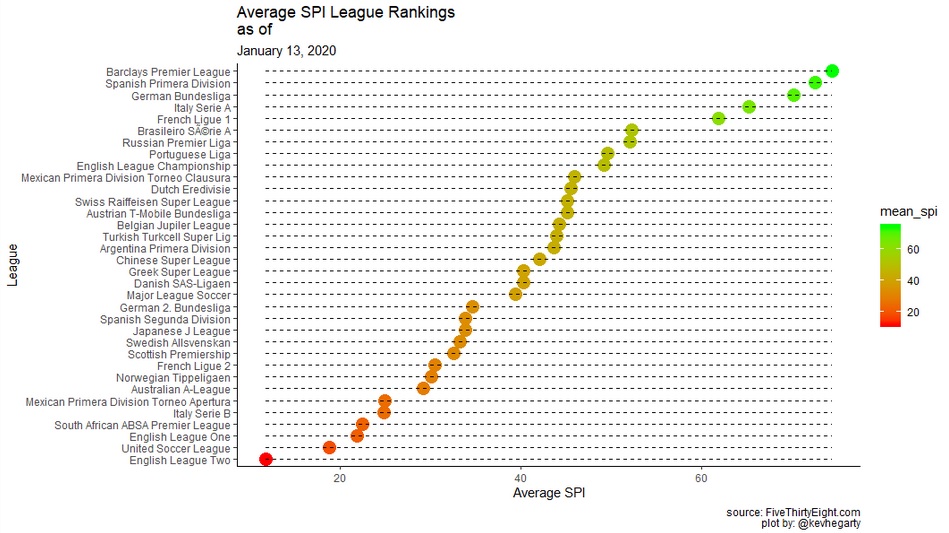 Considering the financial advantages which the Premier League lords over all other leagues – eight of the world’s 20 richest clubs are English – it’s no surprise it is stronger than the rest. For the purposes of this article, we need to establish how strong the league is compared to itself in years gone by.

Enter elo ratings, via the ClubElo website. If you’re unfamiliar with the concept, here’s a summary of the explanation from the site:

Elo estimates the strength of a club based on the results against opponents and their strength. Every game’s influence decreases when new games are played. In this way, a club’s Elo rating is a combination of all its past results with games from the distant past having only a microscopic influence and newest games influencing the rating most. Elo does only consider results though, it completely ignores how the game went.

When clubs play each other and win or lose, they exchange points, with home field advantage factored in. A win by a high margin is considered to be more significant than a win by a narrow margin. This is taken into account when the number of exchanged points is calculated.

So as an example, Liverpool (whose elo history can be viewed here) only earned 0.8 points when they beat Brighton by one goal at home, but a 4-0 win away at Leicester was worth 7.7 points. Exchanges occur on draws too, with the amount determined by which team was expected to win, based on their elo ratings. For instance, the Reds lost 4.5 points by drawing at Old Trafford, and 7.7 when Napoli left Anfield with a 1-1 result.

Like any model, it won’t be perfect. Liverpool are currently rated as the fourth best team ever which will certainly rile followers of other clubs. It’s easy to see how they’ve earned it though; since the start of last season Jürgen Klopp’s team have amassed 164 league points from the 183 available, and recorded Champions League victories over five teams currently in the elo top 20, with another two sides in the top 30 vanquished too. A 4-0 win over Barcelona is worth 25 two goal wins over Watford, as it should be.

Anyway, we’re here to determine how strong the Premier League is this season. To attempt this, we’ll look at how the average elo ratings of the 20 teams in the league on 25th January 2020 compares to the same average on 1st June of each previous year (with the date chosen to ensure the season was over).

Of course, the figures for 2019/20 will have inevitably shifted by 1st June, but having checked four seasons where serious achievements were logged (1998/99, 2003/04, 2007/08 and 2017/18), the maximum difference in elo average between January and June was only 24 points. We’re not looking for statistically significant, scientifically rigorous proof here anyway. Just a guide.

The following table shows the average elo rating of the 20 teams in the division at the end of each season. There’s also some other info which will be explained below. 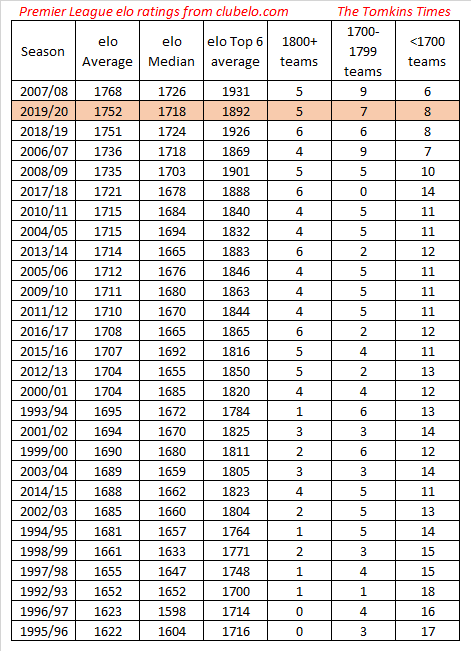 Based on the average, this season is the second strongest Premier League season there has ever been. By this measure, Manchester United’s achievement of winning the league and the Champions League in 2007/08 looks even more impressive. Is it possible to type through gritted teeth? Just wondering.

The median rating of the 20 teams was only higher than it is now last season and in 2007/08. At the top end of the league, the average rating of the top six sides is currently at its fourth highest, with 2008/09 joining the previously two mentioned campaigns.

Of course, with Liverpool being the fourth best team ever in this model, they do drag the averages up a bit. However, dividing teams by arbitrary rating bands also shows 2019/20 in a good light. Four previous seasons had an extra team rated at 1800 elo points or better, but only one of the quartet – 2018/19 – also saw as few rated below 1700.

One way in which the Premier League is perceived to be weaker at present is the relative struggles of some of the established big six clubs. That is reflected here, with Liverpool the only member of the sextet who hasn’t seen their elo rating drop since the end of 2018/19. 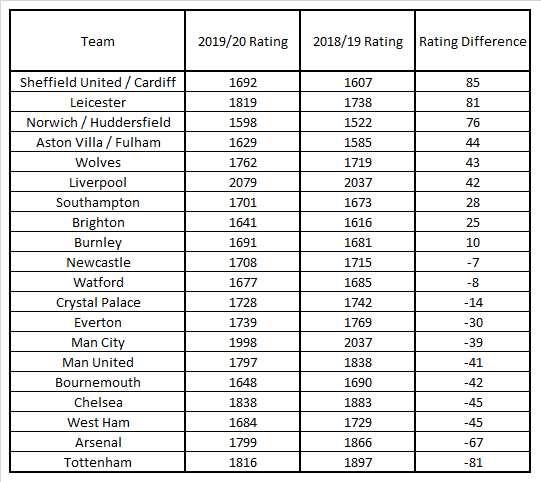 It’s not as if the other big teams have fallen off the face of the earth into League Two, there’s still three European finalists from last season among them. And with that in mind, let’s take a look at how many of the continent’s elite teams reside in the Premier League at present, and how many did so in years gone by. Obviously teams in one league have little impact on the strength of those in another, but the findings are still of interest. 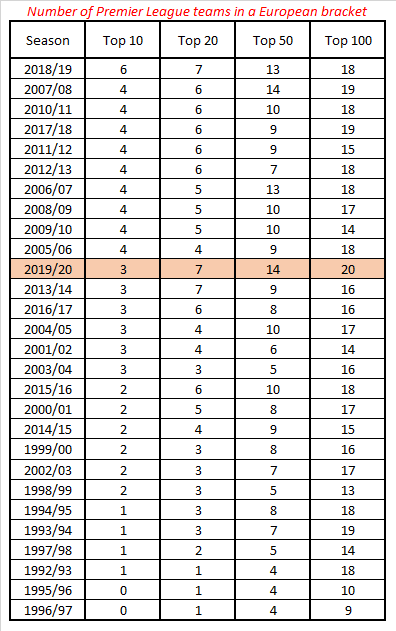 The number of English team’s in the continent’s top 10 has halved since the end of last season. No wonder Liverpool are strolling toward the league title, eh? Except that the Premier League has never had more teams in Europe’s top 20 or top 50, and it has all 20 teams within the top 100 for the first time. And that’s with West Bromwich Albion (who are ranked 90th) outside the top division while Norwich City (98th) are in it.

So what have we proved here? Absolutely nothing, this is just one way of assessing the standard of football teams. What the elo data suggests is that while the level of most of the top teams has dipped since 2018/19 – the other five members of the big six have dropped their elo rating by an average of 2.9% – on the whole the overall standard of the Premier League is about as strong as it ever has been in the past.

But none of this matters. What matters is winning the league, irrespective of how weak or strong it might be. Liverpool will be triumphant, and haters are gonna hate regardless. Their achievement won’t be diminished by accusations of topping a soft league, be they correct or – as this data suggests – more likely otherwise.