August 13, 2019 In Subscribers Only, Transfer Debate

According to Deloitte, the eighteen transfers costing £170m that were finalised on Deadline Day this summer, pushed the total spend by Premier League clubs up to £1.41bn, which is just shy of the 2017 record of £1.43bn (but still an increase on last summer’s £1.271bn). And if the Mersey Millionaires had been able to get the Zaha transfer over the line instead of ‘settling’ for Iwobi, that record would have been broken.

With Liverpool barely dipping a toe into the market and Chelsea with a transfer ban (despite signing Kovacic via the small print), transfer spending shows little sign of slowing. 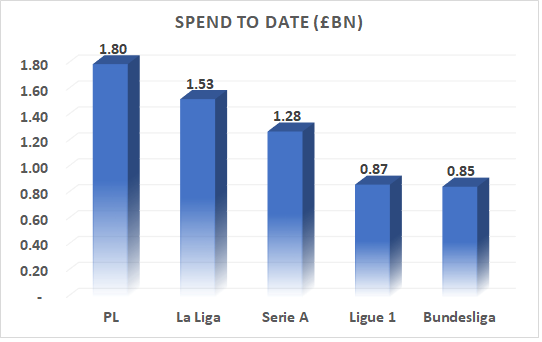 One type of transfer that HAS taken a big reduction is the number of loans out from PL clubs. Last season, there were 165 players loaned out (with Chelsea alone accounting for 25% of them), but that number has now dropped to just 71. Of course, with deadline days across Europe, Scotland and in the third & fourth tiers of England still open, this number may still increase.