November 27, 2018 In Subscribers Only, Talking Tactics

Wednesday’s game is surely going to be this group’s most interesting game to date. As a result of their loss to Red Star Belgrade, Liverpool’s once nailed-on Champions League progression has been put in jeopardy – and they need a win against either Paris Saint-Germain or Napoli in order to be certain of progressing. Likewise, Paris Saint-Germain have to tread carefully on Wednesday, as a draw or loss means that their Champions League fate is out of their own hands. As such, this game is a must-win for both sides – and with Tuchel’s tactical flexibility and the question marks regarding Mbappe and Neymar (and Mane, though it’s likely all three will be available – Ed), we are sure to be in for a few surprises! 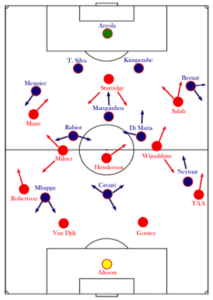 When previewing Wednesday’s game, it makes sense to look at the recent match-up between these two sides, as it can provide some insight into the tactical tendencies of each team and the thought-process behind them.