Set piece goals are like buses. Or at least they were for Liverpool’s opponents in 2017/18.

This is a table of the set play goals Liverpool conceded in the league last season. A few things stand out, not least that none of them occurred at Anfield. Indeed, the Reds were the only side in the division not to concede a set piece goal on their own patch. They also only let in three across the final 29 matches of the campaign, but perhaps the most interesting thing was that they conceded twice in three matches (and they also did so at Sevilla in the Champions League, but this study will only focus on domestic matters).

If you want to fuel confirmation bias which believes you’re bad at defending dead ball situations, conceding twice in a game every so often will certainly do that. However, in terms of goals allowed from set plays, 2017/18 was Liverpool’s best season in the last nine. 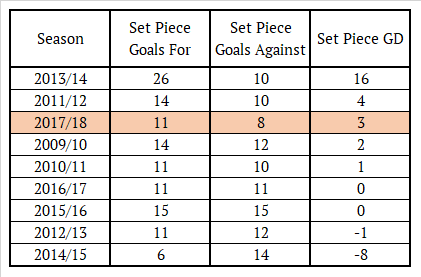 But of course, it’s not enough to simply consider the goal tallies, and a look under the bonnet at the underlying statistics (which are taken from Understat) is definitely not so positive. The expected goal per set piece shot that Liverpool’s opponents collectively mustered last season was the highest it has been across the past four years, and it was also the joint-worst in the Premier League.

The rest of this article is for Subscribers only. There’s a ‘Subscribe’ tab at the bottom of the page.