June 12, 2018 In Statistical Analysis, Subscribers Only

The Premier League season closed a few weeks back … and the high emotions of the Champions League final have finally subsided. So now seemed the right time to call time on the season by having a brief statistical look at how the different Premier League teams compared to one another. At the same time, I’ll be taking a little glimpse at how LFC have done compared to our rivals and where we can improve.

Using stats to quantify a goalkeeper’s ability and quality has long been the holy grail in the analytics world. People with much larger brains than I have tried to work this out, to little avail (or if they have, they’ve kept it in house), so this look will just give us an idea of how each team has performed. 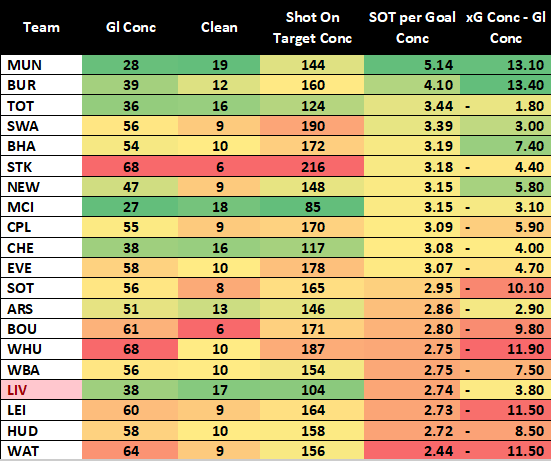 The basic numbers look pretty good for LFC. We conceded the joint 5th least amount of goals (the same as Chelsea and just two more than Tottenham). We also had the third best number of clean sheets after United and City, with the latter being the only team to concede fewer shots on target than us. All in all, a pretty decent showing.

The concern comes from the number of shots on target per goal conceded, seeing us the 4th worst in the league only ahead of Leicester, Huddersfield and Watford.