February 8, 2018 In By Andrew Beasley, Scouting, Subscribers Only

Statistics correct as at 6th February 2018

Liverpool will shortly be taking part in their first Champions League knock-out match for almost nine years. They played and beat the likes of Barcelona, Inter Milan and Real Madrid at this stage under Rafa Benitez, but this time they face the Portuguese side Porto. As the Reds were knocked out by Benfica at this stage even when regularly dining at Europe’s top table, then perhaps they should be wary.

To try to see how wary, this article will look at Porto’s statistics for the 2017/18 season, and see if there are any particular players who are likely to cause Liverpool particular issues. But as good as some of the numbers in this article will appear, it is essential to keep in mind that the quality of the Portuguese league is mostly not high. A look at the ELO ratings of the teams in Liga NOS and the Premier League reveals there are only three in the former who would be of decent standard in the latter. 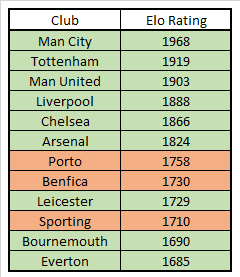