January 11, 2018 In By Andrew Beasley, Statistical Analysis, Subscribers Only

Statistics correct up to 4th January 2018.

The first half of Liverpool’s current and previous seasons haven’t felt very similar whatsoever. Yet after 22 league games, only one point separates the current crop and what Jürgen Klopp achieved at this point in 2016/17. 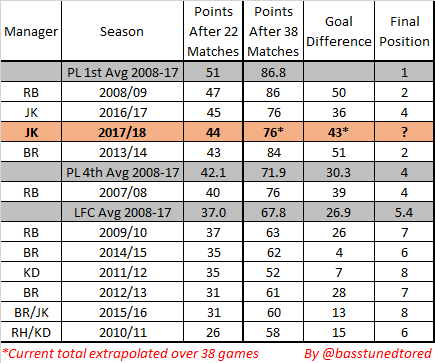 Comparisons can be many, and progress can be measured in multiple different ways. Liverpool have achieved their points total this season whilst balancing the intense demands of a Champions League campaign; the Reds went to the semi-finals of the league cup in 2016/17. Liverpool are currently fourth in the league; the Reds were fourth in the league last year too, but eight points closer to the top than they are now.

Liverpool have lost one fewer league match up to game 22 this season; the Reds didn’t lose any of their three as badly as 1-4 or 0-5 last term. Liverpool made the signing of the summer in Mohamed Salah; the Reds didn’t have first team players running down their contracts, or fluttering their eyelids at Barcelona a year ago.

And on it goes. Another way to look at things is to consider a team’s results in the corresponding fixtures from the previous campaign. Simon Gleave (Twitter), head of analysis at Gracenote Sports, keeps track of such things, and tweets the results out each week.