English Managers are Substandard – the Proof!

English Managers are Substandard – the Proof!

In response to my article on how English managers are just not good enough to warrant the chances they feel they deserve, TTT’s historical stat guru Graeme Riley went away and produced some figures for a comment he posted under the original piece. I asked him to work it up into an article, and also, I requested that he look specifically at the top six over the past decade, because certain stats will reflect badly on British managers (if they are only getting jobs at struggling clubs). As expected, the English managers fare badly, as would British managers in general if it wasn’t for the presence of Alex Ferguson. PT. 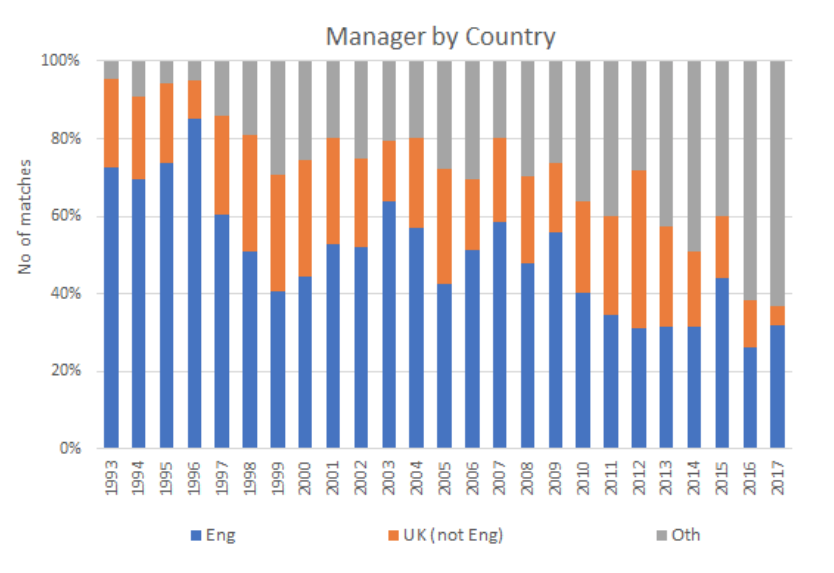 The above graph shows the number of matches managed by English, rest of UK (excluding England) and overseas managers. Not surprisingly there is a rapid decline in 1996 as the market opened with ever increasing amounts of media money, and it has further decreased in 2010 and remained at very low levels ever since. In recent years, largely due to the loss of Alex Ferguson at Manchester United, the other UK proportion has decreased as well. So clearly local managers are being given fewer and fewer opportunities to manage. 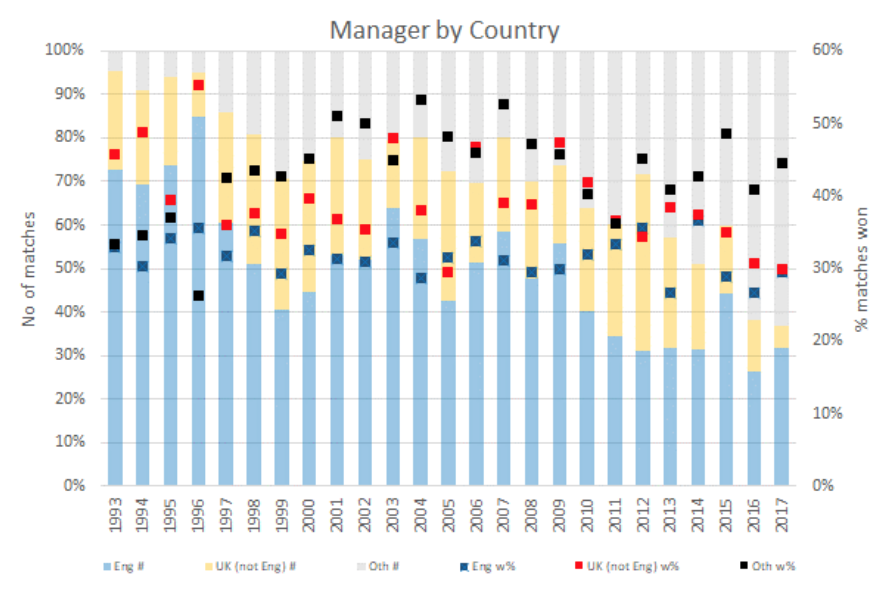 The above graph shows (with the % of matches managed by English, non-English UK and overseas managers faded into the background) the win ratios on the right-hand scale.

With Ferguson in charge of a successful Man Utd team, the % of wins by non-English UK managers remained high until he retired, and has rarely been bettered by English managers, whose win ratio remains stubbornly around the one in three mark, or even below this. 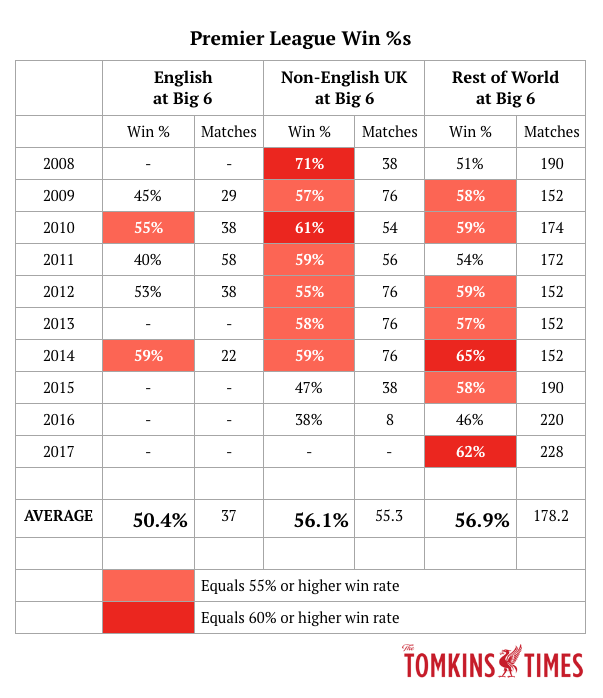 The above table shows how each of the nationality categories have performed as manager of the Big 6 (Arsenal, Chelsea, Liverpool, Man City, Man Utd and Spurs) in the last decade. 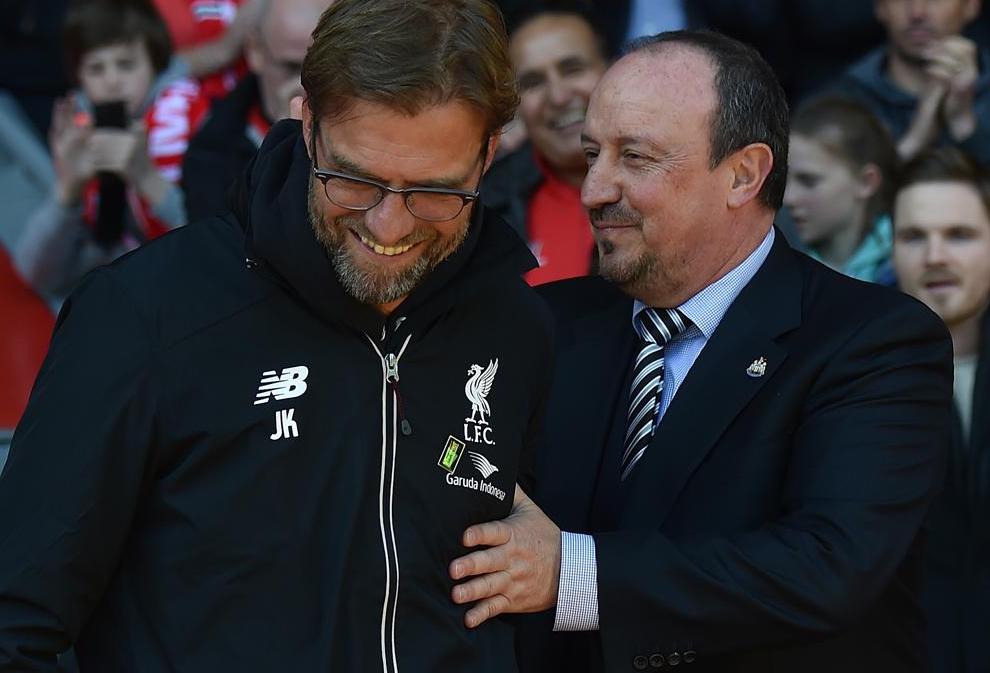 “… and then they replaced me with Roy Hodgson!”

It is clear that English managers perform consistently worse than those from other countries even when give the chance of managing a Big Six team, although thanks in no small part to Ferguson’s dominance at Old Trafford, the other UK nations fare much better, on a par with the rest of the world.

Subsequent to his retirement, the UK performs much worse as a whole and in 2017 was not even represented. The vast majority of the English performance comes from one man, Harry Redknapp at Spurs, with relatively small supporting contributions from Roy Hodgson (who failed at Liverpool) and Tim Sherwood, the latter also being at Spurs.

How do nationalities compare in head to head match ups though? 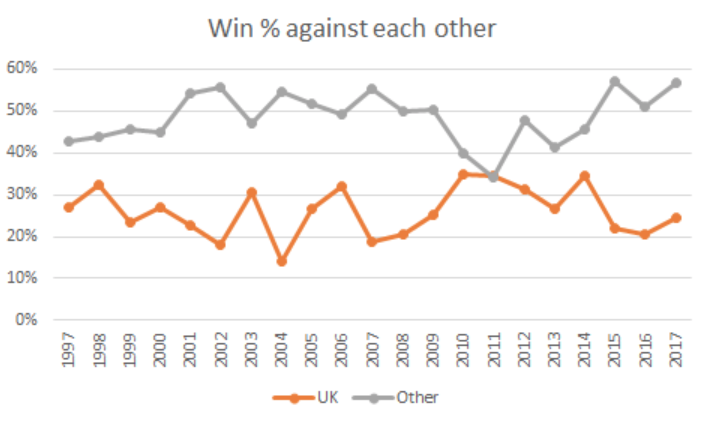 The first time there were 100 matches between UK nationals and overseas nationals was in 1997 (the sample sizes were too small previously, and so have been ignored). In these matches the overseas managers come out on top and the trend in recent seasons is for the gap to grow. Non-UK managers are winning well over half the games and UK nationals can only manage around a quarter, the remaining quarter being drawn. 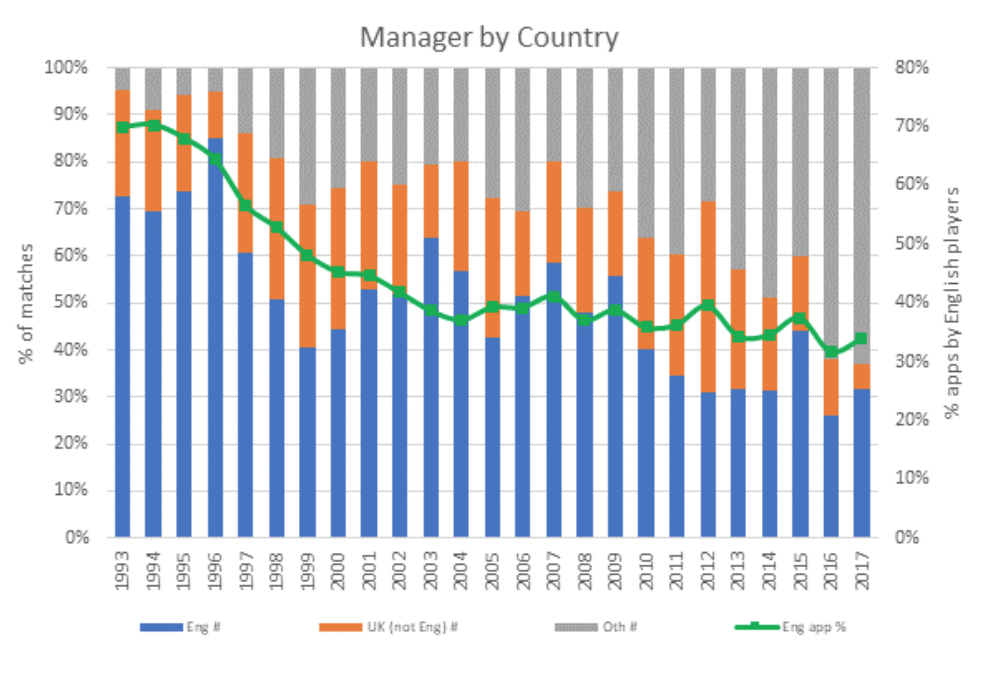 If we consider finishing positions since the inception of the Premier League as well (taking the manager who had the most number of games for a club if a change was made midway through the season), the picture is even more stark. Top four finishes are rather rare, with only 15 managing to reach these positions, the most recent being Harry Redknapp in 2009-10 and 2011-12. Bobby Robson managed it a couple of times, a decade and a half ago, with Kevin Keegan achieving it three times between 1993 and 1997; but the most successful of all was Roy Evans with four top four finishes in four successive years, with this not being considered sufficient to keep him in the role as we all know. (Back then, only the top two or three qualified for the Champions League.)

No Englishman has won the title in the new era (since Howard Wilkinson in 1992), despite the fact that every one of the Big Six except Arsenal (due mainly to longevity of Wenger*) and Manchester United, has been managed at some point by an Englishman, with varying degrees of failure. (After Ferguson, United went for a modern British manager and failed.) In comparison, two out of every three relegated teams have been managed by an Englishman for the majority of the season in question.

(*Bruce Rioch is essentially English, but represented Scotland. His performance at Arsenal would not help the English figures if included.)

So the theme throughout is that English managers produce fewer wins and pick fewer English players, with current values sitting at roughly 1 in 3 managers being from England, producing far fewer wins than their overseas counterparts at just above 1 in 4 (relegation levels), and not even bothering to pick English players even then as the proportion dwindles to 1 in 3.

It’s no longer an English game – it’s now often run by overseas owners, who select more successful overseas managers, and buy a high number of overseas players. The best English players still get their chance – see Spurs and Liverpool for their high quotas, as well as a few individuals at both Manchester clubs – but there just aren’t any proven English managers. Aside from Alex Ferguson, British coaches in general have tended to struggle at top six clubs in the past decade. Had they done better, it may have encouraged other clubs to follow suit. Instead, most now avoid home-grown bosses, with good reason.