October 16, 2017 In Match Discussion, Subscribers Only

By Daniel Rhodes and Chris Rowland.

Liverpool resume their Champions League group-stage campaign with a trip to Maribor on Tuesday evening. After two draws from our opening two fixtures, amidst what seems to be an endless run of draws in the league, we’re really looking for maximum points in our back-to-back fixtures against what is regarded as the weakest team in the group.

The Slovenians drew their opening Champions League home game 1-1 against Spartak Moscow before losing 3-0 at Sevilla.

Domestically, defending champions Maribor have yet to lose this season, with eight wins and four draws from their opening 12 games. However they are still two points behind leaders Olimpija Ljubljana. Their last game was a 2-1 away win over struggling Aluminij, with two second-half goals.

Coach: Darko Milanic has five league titles and four Slovenian Cups to his name across two spells with Maribor. He had a winless 32-day stint in charge of Leeds United back in 2014, which in recent times constitutes an average term at that particular club!

The Styrian side’s top marksman so far this term is four-goal forward Jasmin Mesanovic. Last season’s leader with 15, Luka Zahovic, has yet to score this time around.

• The Slovenian side have lost only one of their four home games against Premier League visitors. In their only previous UEFA Champions League home match against an English club, they held Chelsea FC to a 1-1 draw in the 2014/15 group stage.

• Maribor are unbeaten in eight European home fixtures (W5 D3); in fact, they have lost just three of their last 14 games, home and away (W6 D5).

• However, Maribor have not won any of their seven home matches in the UEFA Champions League, group stage to final (D3 L4).

• The Slovene outfit are in the group stage for a third time, having previously competed in 1999/2000 and 2014/15. In that latter group appearance they drew 1-1 at home to both Sporting Clube de Portugal and Chelsea, and lost 1-0 to FC Schalke 04.

• Maribor qualified for this season’s UEFA Champions League by winning a sixth Slovenian title in seven seasons in 2016/17. In Europe last term, they beat PFC Levski Sofia and Aberdeen FC before losing to Gabala SC in the UEFA Europa League play-offs.

• Maribor reached the current group stage by overcoming HŠK Zrinjski of Bosnia and Herzegovina 3-2 on aggregate in the second qualifying round (2-1 away, 1-1 home) and Iceland’s FH Hafnarfjördur in the next round (1-0 home, 1-0 away). In the play-offs they went down 2-1 at Hapoel Beer-Sheva FC in the first leg but progressed on away goals thanks to a 1-0 home success.

Liverpool
• Liverpool’s only previous fixtures against Slovene opposition came in the 2003/04 UEFA Cup first round, when they drew 1-1 at NK Olimpija Ljubljana before a 3-0 victory at Anfield.

• Five-time European champions Liverpool did not take part in UEFA competition in 2016/17, when they finished fourth in the Premier League. They are aiming to reach the UEFA Champions League knockout rounds for the first time since 2008/09.

• The Reds earned their place in the group stage – for a tenth time overall – with a 6-3 aggregate play-off victory over TSG 1899 Hoffenheim, winning 2-1 away and 4-2 at home.

• Liverpool have won just two of their last 14 European away games (D7 L5). Before triumphing at Hoffenheim in their play-off first leg, their last away victory had been a 1-0 UEFA Europa League group stage win at FC Rubin Kazan on 5 November 2015. 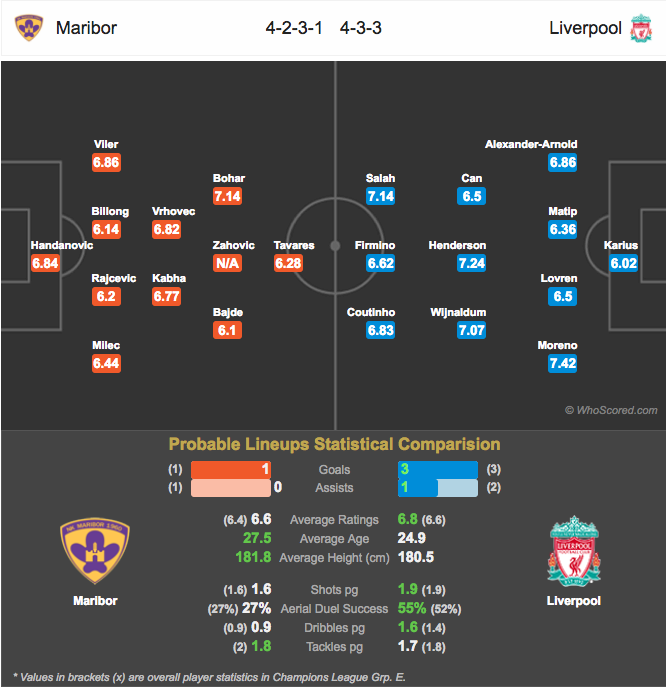