Rating Liverpool’s Chances – The Good, the Poor and the Dangerous Moments

Rating Liverpool’s Chances – The Good, the Poor and the Dangerous Moments

September 20, 2017 In In-Depth Analysis, Subscribers Only

You will all be familiar with Opta. They are the official data provider for the Premier League, and it is their figures which you see after the match on TV, or via websites such as WhoScored and Squawka. But they are not the only company collecting football data; far from it.

Stratagem also collect statistics, but they collate different things to Opta (or at least, they are different things to the Opta data which seeps into the public domain via the aforementioned websites). In simple terms, a lot of their definitions are more subjective. For starters, they grade chances into six levels from ‘poor’ to ‘superb’. As a guideline, poor chances would (for example) be from long range and with many defenders in the way, through to superb chances which are basically open goals.

Interestingly, the chance numbers also contain what they class as ‘dangerous moments’; these are defined as “occasions when a shot is not always taken but the opportunity is there to shoot (for example a ball across the 6-yard box the striker comes close to making contact with)”. These can often be better attacking opportunities than shots that actually take place. Around 17% of dangerous moments are classed as superb or great chances, when only 10% of all chances are classified as such.

Stratagem have kindly allowed me to take a look at their numbers for the 2016/17 Premier League season, so my first thought was naturally to investigate how Liverpool got on.

Liverpool had a total of 509 chances (the 4th most in the league) and allowed 257 (the fewest), but what proportion of their chances were in each of Stratagem’s categories? For the record, I have excluded own goals and penalties for this article.

It’s just as well the Reds allowed the fewest chances in the Premier League, as only Swansea had a greater proportion of opposition chances classified as superb or great; 14.5% to Liverpool’s 13.6%. I guess this only confirms what we already knew from watching; ‘Pool defend pretty well on the whole, but the chances they allow tend to be high quality.

Looking at the front end, we can see Liverpool had a very healthy proportion of ‘great’ chances (which based on the definition are broadly comparable to Opta’s well known ‘clear-cut’ chances). Only Arsenal (11.8%) and Manchester City (12.7%) had a higher proportion of their chances in this category.

On the downside, the Reds had the fifth highest proportion of ‘fairly good’ chances in the division. An example of this type of chance would be “a shot from just outside the box but with a clear path to goal”. My immediate thought here was “there must be lots of Coutinho long rangers in there”, so let’s see the player breakdown. The numbers highlighted in green are the top one for the category. 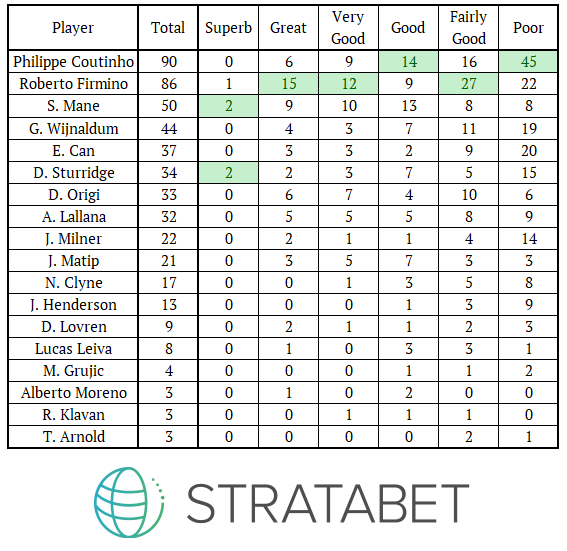