The day starts bright and early with my two organic alarm clocks (a 4 year old daughter and 7 month old boy) affording me the luxury of a lie-in until just before 7am.

Before I leave, I ask my daughter what she would like me to bring back from the game for her; this being the bribe for both a) abandoning her for the day and b) not taking her with me.

She asks for a monkey. OK. My 7 month old smiles beatifically at me. I’ll play it by ear as to what I get him.

I head out of the door at about 10.30. From Stone in Staffordshire, between Stafford and Stoke-on-Trent, to Liverpool is about 1 ½ to 2 hours’ drive, so I naturally set out 4 ½ hours early in case of an M6 apocalypse.

Funnily enough, the traffic is fine with no sign of Armageddon, and I park up on Townsend Lane at around 12.30, and then have a 15 minute walk up to the ground. 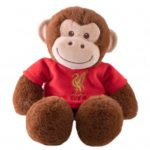 My first task of course is to go into the new megastore. What’s the first thing I see as I walk in? A toy monkey wearing an LFC top. My daughter obviously knows more about these things than I do.