A Big Six, or Just a Rich Three?

A Big Six, or Just a Rich Three?

August 11, 2017 In In-Depth Analysis, Subscribers Only

I recently read an excellent article by The Swiss Ramble. In the article he highlighted some financial figures that generally aren’t collated in the manner in which he presented them. Namely, comparing the wages of the current top six in the Premier League.

Unfortunately, due to the way in which accounts are submitted (usually around a year after the financial year has ended), the only figures for all of the top six clubs go up to 2015 (though some included 2016), and in this particular piece he only collated the data from 2007.

This sent me to look at the net spend of these clubs for the given time period, and compiled the relevant information from Transfer League.

In this time frame, the top six clubs have a net spend of £1.42bn, but spent the colossal figure of nearly £7.2bn on wages. And I bet you can guess who the biggest spenders are…

In fact, if you compare the spending of Chelsea, Man Utd and Man City (which I will call the ‘Rich Three’ for expediency) against the spending of Arsenal, Liverpool and Tottenham (the ‘Poor Three’), you see a monumental imbalance emerge over time. 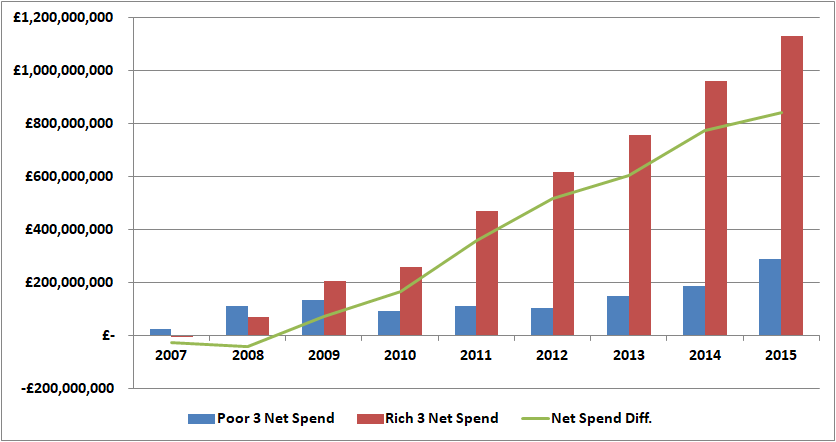 The figures for this and all graphs are cumulative

After the first two seasons, the Poor Three had a net spend of over £40m more than the Rich Three.

It’s little wonder that people complain of financial doping, and given the way this window is panning out, it shows no signs of letting up. But the imbalance doesn’t just relate to transfer spends, it applies to wages too.