Progress at a Price?

Progress at a Price?

Imagine a world where there was no mobile phone, no satellite and cable broadcasting, no goals to watch or players to scout on YouTube, not even teletext on TV. Where the arrival of the internet, or world wide web, or information superhighway as it was variously known at the time, was still over a quarter of a century into the future.

Where the only televised live football was the FA Cup Final, the annual England-Scotland game, World Cups and if a British team reached a European final. 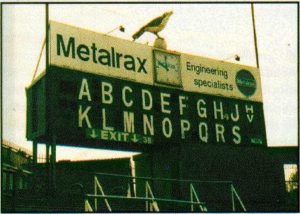 Where the only way to find out how other games were going if you went to the match – and all 11 games were concurrent – was a tinny crackly transistor radio held to your ear or by the half-time alphabet scoreboard. You looked in your programme for which letter was for which match, and a guy sauntered up and slid numbers into the slot, like a cricket scoreboard. ‘B – Aston Villa v Manchester City. 1-0’. Imagine the excitement, the roar, when for ‘D – Coventry v Everton – the first number slid in was ‘2’, followed by a ‘0’. Those few seconds gap before the ‘0’ arrived was pure theatre.

There was such a time you know, I haven’t made it up. It was called the late 1960s and 1970s. When I and I’d guess a good few TTT subscribers started going to the match.

Back then, Match of the Day offered you highlights of their chosen main match – bloody annoying if you’d had a great or important win but it was another match that was less important (it was ALWAYS less important) – and maybe a few bits and pieces from a couple of other games – the goals, a near miss, a save. If your game wasn’t one of them, tough.

Midweek, Midweek Grandstand with David Coleman did a similar job, only usually the highlights were of an English club in European action – and that stood a good chance of being us.

What you did have available was radio – Saturday afternoon commentary with ‘updates from around the grounds’, and the centrepiece , BBC Sports Report, with the same theme music  as now – “It’s 5 o’clock, it’s Saturday, it’s Sports Report “ – te-tum-te-tum-te-tum-te-tum – “and today’s football headlines: Liverpool edge nearer another title with a win against West Ham …”

As for television, BBC1 – one of the three TV channels available – would have a similar results round-up show.  And there were the newspapers – you could usually get a report of Liverpool’s game in there, though not always. It sometimes meant furtively flicking looking through them all in the shop to see who had Liverpool coverage, and the biggest.

There was also the Liverpool local press – the Echo, the Daily Post and the Saturday afternoon Pink Echo, devoted almost entirely to football news and views and featuring a minute-by-minute report of today’s Liverpool and Everton matches. I miss the pink, usually printed and ready for sale within an hour of the game finishing. I still recall the street vendors around Lime Street yelling ’Get yer pink’ by the time you were back from Anfield. 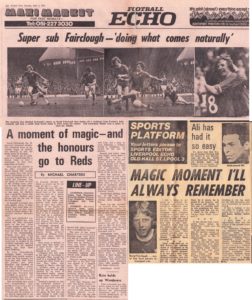 And that, basically, was your lot.

It was quite conceivable that there some of your team’s games you knew almost nothing about apart from the result. Unless you actually went to the match, of course – the only way to be certain how it went! And it was unavoidable that you never got to see a fair number of the goals your team scored or conceded during the season.

It was quite common not to know the other results until the Sunday papers, if you’d been out and didn’t hear the radio or see the TV.

As for transfer gossip – well you opened your newspaper and there, tucked away in some distant corner of an inside sports page, there may be a five-line story that ‘Liverpool were watching Scunthorpe United youngster Kevin Keegan’. Or even ‘Liverpool sign Keegan’ . That was it. Apart from chatting with somebody from Liverpool, whose auntie’s friend has her hair done at a hairdresser who’s going out with somebody who works in the club offices and says Shankly is going to sign Emlyn Hughes from Blackpool for quite a lot.

Scroll fast forward 40+ years and the above may sound like living in some post-apocalyptic hell-hole with a total news blackout imposed by the self-appointed rulers of a new world. Fear the Walking Dead (Millwall away!).

Compare and contrast, as they used to say, with the communications shock-and-awe assault of today. We live in times of endless scrutiny and micro-analysis, of data and stats, of freeze-frame, slow-mo and close-ups, with cameras hovering directly above the pitch. We can see every incident and from every angle, a world of technological bells and whistles to draw lines on the pitch, highlight a salient point, enable forensic study of every facet of the game and every facet of each individual’s performance.

In this world, the notion of not seeing every goal in every match your club plays is unthinkable and unimaginable. You can watch it as many times as you like, when you like.

Yet such intimate dissection can sometimes seem like death by a thousand cuts. Am I arguing that we were better off before? No, of course not. We can have it all now.

But there is a price to pay; that rabbit-in-a-headlamp stare at yet another day’s endlessly recycled and syndicated transfer gossip, like a fire that refuses to die and keeps reigniting, akin to being inside a mildly benign asylum, as I know too well.

That sense of frustrated impotence at the keyboard warriors’ latest angry attacks on the club after a dropped point or a missed tackle. Do they wait till the game’s over? Do they hell, it’s while it’s still happening.

That gnawing despair with the knee-jerkism, the obsession with the here-and-now, and the attendant death of patience and working to a plan, of steady progress, of building – Klopp’s method. 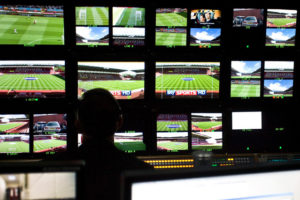 That sense of ennui at the sheer amount of live football or football discussion available, a match a day, forever, with highlights and discussion to fill in the awkward hours in between live matches, with an endless supply of so-called experts farmed in a factory somewhere, like salmon– can’t it just be turned down, or even off, occasionally, to let some light in, some other life in?

A constant diet of caviar can leave you craving a cheese sandwich (OK I’m guessing here!).

Of course it’s that flash flood of broadcast money that enables me to see Liverpool’s every moment. It also enables them – and lots of other teams – to bid for and occasionally sign talent that we otherwise couldn’t dream of affording.

We may argue it’s reached saturation point, but the feeling is that it hasn’t reached its zenith yet. When Jeff’s much-prophesied moment arrives when international broadcast rights revert to individual clubs and  Liverpool FC starts taking the income from broadcasting its matches rather than it being taken by a few global media oligarchs, will we become so one-club focused that we forget that we’re in a league with 19 others and that context is all? That the result of Burnley v Stoke does relate to us, how  Burnley are doing does matter because they’re our next but one opponents, or the next opponents of a team we’re fighting for the title with?

Besides, being a football fan in the 70s and 80s wasn’t all bad. Sometimes you even got a break from the match, from football, leaving you fresher for the next one! Not that I pine for the days when just finding the result was hard enough – apart from it meaning that Liverpool ruled the roost and I was 40 years younger!

It’s just that the modern media bombardment, the constant exposure, scrutiny and analysis can be wearing at times. It never stops. It demands, constantly, like a hungry baby, always seeking your attention. If you don’t respond, I’ll shout louder.

It does sometimes make me wonder whether we’ve just swapped one set of difficulties for another.