How Was Their Season? No.17: Philippe Coutinho

How Was Their Season? No.17: Philippe Coutinho

June 12, 2017 In End of Season Player Review, Subscribers Only

The final review of the season. The icing on the cake. The magician in the ranks. The authentic hype in the often over-used hyperbole.

This is my third one of these this season, and it feels like I need a full pre-season to recover from the post-season. Keeping them original and fresh is a challenge; as hinted at above, and there’s not many words left to describe Philippe Coutinho. They’ve all been used, and over-used. For that reason I’ll try to describe Coutinho in video clips, but first, it wouldn’t be an article by me without at least a few important stats. 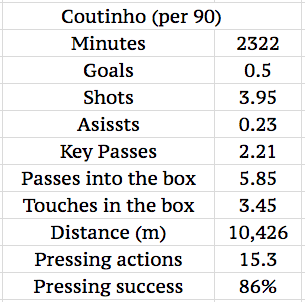 The season started slowly, with a dismal first half against the Gunners in North London. They had a under-strength side with a rookie centre-back and were missing some of their big names. We’d secured our targets early, and looked well prepared. But, as the half-time whistle loomed, Coutinho banged in a world class free-kick, and followed it up just after half-time with the finish of a poacher…