These stats are 100% unofficial. I have had no formal training in how to collate them, but from years of working with football stats I have a pretty good idea of how they are gathered.

For the 40th anniversary of Liverpool’s first European Cup win, I thought it would be interesting to review the match and judge it statistically by modern standards. Did the Reds deserve to win the trophy?

I watched the match in full via the below YouTube video, with legendary commentator Barry Davies for company. After about half an hour, Davies happens to mention he “Talked to a number of supporters before the match, 3-1 was the most popular score…To Liverpool, of course”. According to Davies, this was the Reds’ 90th match in European competition, some thirteen years after they made their debut. Different eras of course, but Rafa Benitez had 85 European matches in just six seasons at Anfield. Here’s the full match:

Note: embedded videos are causing pages not to load via the Facebook mobile app, so all of the videos have been “hidden” for anyone not on desktop, so as to allow the page to work. The full video can be accessed here.

I will be recapping the match, using short clips to illustrate certain parts of it, as well as looking at the expected goals figures, and some individual player stats. Before we begin, let’s take a look at the two teams. 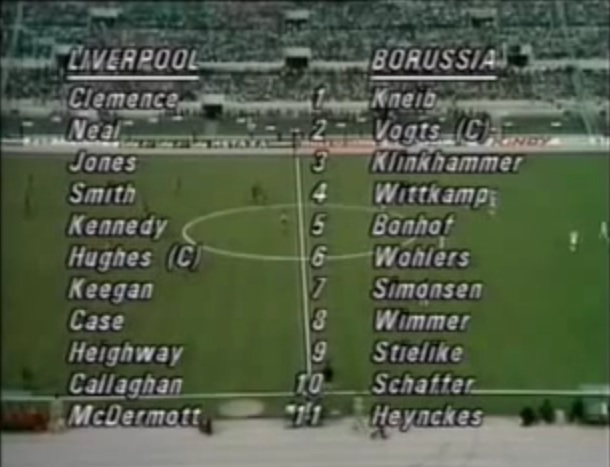 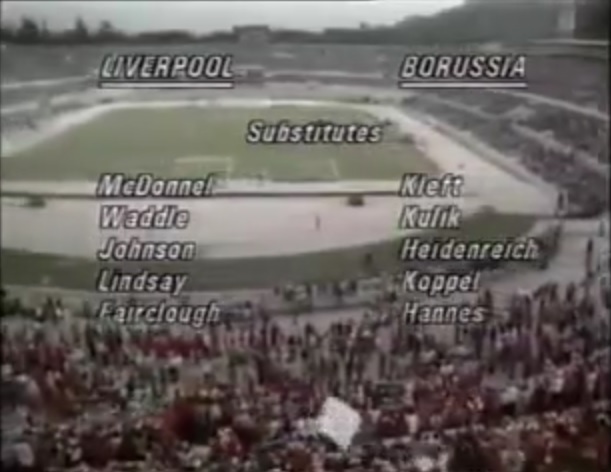 The match started fairly slowly, with both sides content to pass the ball around and not take too many chances early on. Mönchengladbach were the happier of the two to keep hold of the ball, with Liverpool more concerned with getting it forwards quickly. Aside from a Jupp Heynckes shot which was comfortably blocked near the penalty spot after five minutes, the two teams were content to trade shots from outside the area for the first twenty minutes or so.

Liverpool’s first real scare in the match happened just before the half way point of the first half. Jimmy Case took a corner for the Reds, but Mönchengladbach cleared it and launched a counter attack. Rainer Bonhof was allowed to approach the penalty box, and he duly rattled Clemence’s right post from distance:

Six minutes later, Liverpool took the lead. Heighway played a brilliant through-ball to pick up the run from McDermott, and he made no mistake when clean through. As the covering defender wasn’t close to the scorer, I have marked this down as a clear-cut chance. See what you think about that in the below clip, and keep an eye on Heighway in the replay:

Wasn’t his continued run and little skip when assisting the opening goal in a European Cup final delightful?! Before the half drew to a close the sides traded a long range effort apiece, but Liverpool deservedly went in ahead at the break. Here are the shot stats after 45 minutes:

After a quiet start to the second half, the key fifteen minutes of the match took place between about 50 and 65. Firstly, a defensive error by Jimmy Case allowed Allan Simonsen to break into the box and equalise. Due to the angle from goal and the covering defender, I didn’t class this as a big chance. Hell of a finish though!

The Reds were then on the rack for a spell. Before Liverpool could have another attempt at goal, the German side had two efforts which I believe are clear-cut chances. Here’s the first which, bear in mind, is less than a minute after the restart following Mönchengladbach’s goal:

And here’s the second. It was about ten minutes after the previous effort, and the Reds should’ve perhaps had a penalty in that period, but it was another great opportunity for the team in white:

Is it too dramatic to say the history of Liverpool Football Club might have been very different had Mönchengladbach taken one of those chances? It’s certainly fair to say it would’ve been very tough to win the trophy from 2-1 down. Fortunately for Liverpool they didn’t concede from either chance, and retook the lead from their next corner, which was their fifth of the match. In total across the whole match, the Reds had seven corners whilst the German side had none.

I think Tommy Smith wins two aerial duels at once to get his header away on this one. Which wouldn’t have been beyond him; Smith was notoriously hard, and as Davies says in commentary, “If you’ve got a bad knee, Tommy Smith is not the player to play against”.

Similar to the pattern of the first half, the sides were then restricted to efforts from distance following the goal. What turns out to be Mönchengladbach’s final attack which truly concerns Liverpool is in the 77th minute. There’s no shot, so it isn’t logged in the stats, but as you’ll see here Ray Clemence made some vital touches to prevent any attempts at his goal:

The move and cross from substitute Christian Kulik was almost identical to one of the clear-cut chances I highlighted earlier. The German side presumably targeted Joey Jones as the Reds’ weak link, and they certainly had some joy down his side of the pitch.

The one remaining action of note was a tremendous run from Keegan which resulted in the award of a penalty which Neal tucked away with customary aplomb. It seems unusual to modern eyes, but man marking used to be more common, and in this match (particularly the first half), Berti Vogts, captain of the German side, followed Keegan everywhere. Fortunately for Liverpool, on one of the few occasions Keegan got the run on him, Vogts followed Mighty Mouse’s most penetrating run of the match and brought him down, as you can see here:

And with that, the European Cup was heading to Anfield for the first time. But thankfully not the last either. Let’s take a look at the story of the match via an expected goals chart heavily inspired by the fine work of 11tegen11. 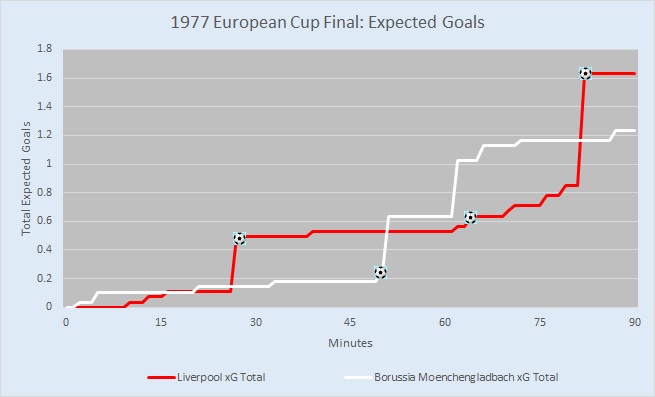 You can see Mönchengladbach’s two clear-cut chances between their equaliser and Smith’s goal, as they are represented by the steep white lines. Prior to the late penalty, Liverpool were perhaps lucky to be leading based on this.

The Reds were certainly clinical on the night. You can see from the below shot map that they converted all three of their shots on target in the box. In case you’re not familiar with Stats Zone shot maps, yellow lines are goals, blue are shots on target, red are off target and grey are blocked. 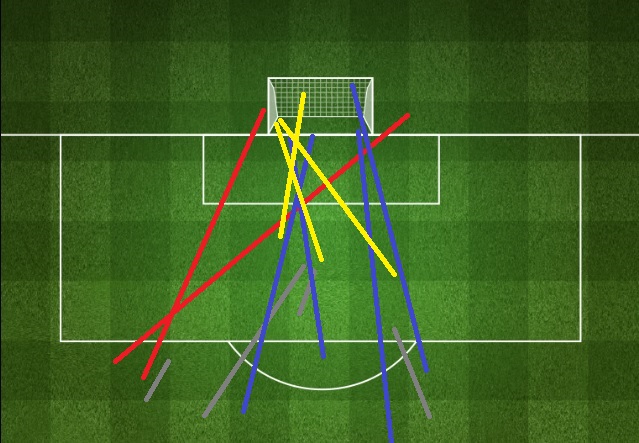 Here’s the German team’s shot map. Notice how there was just one save in the box by either ‘keeper on the night, which was a clear-cut chance save by Clemence at 1-1. Massive! 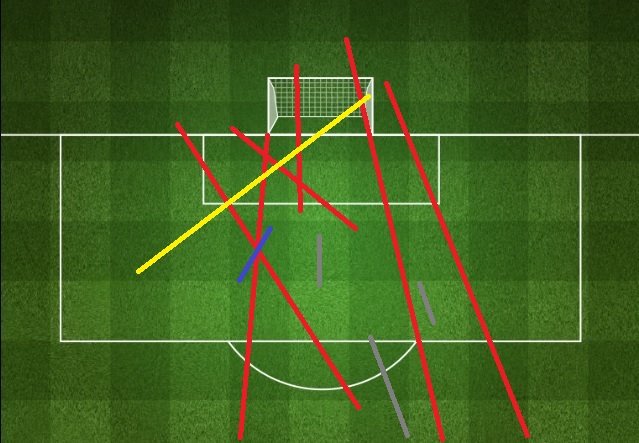 So who was most involved in an attacking sense for Liverpool? Here are the player’s shot and creativity stats.

Terry Mac was involved in the most shots with five (four taken and one created) followed by Kennedy on four. A tip of the hat to Steve Heighway too; I’d imagine two assists in a European Cup final is a fairly unusual feat.

To finish, I thought I’d compare the shot stats from this match to the six most recent Champions League finals, to see how they match up. I’ve only looked at the first 90 minutes for those which went to extra-time and/or penalties.

The 1977 final was a little light on shots compared to some, but the average shot quality was better than four of the most recent six finals. These figures also bring home how long it has been since an English club deserved to win a Champions League final.

I’ll leave the last words to Barry Davies, as he surveyed the joyous Liverpool fans at the end of the match:

“Just look at that… It makes you proud, that’s the word.” 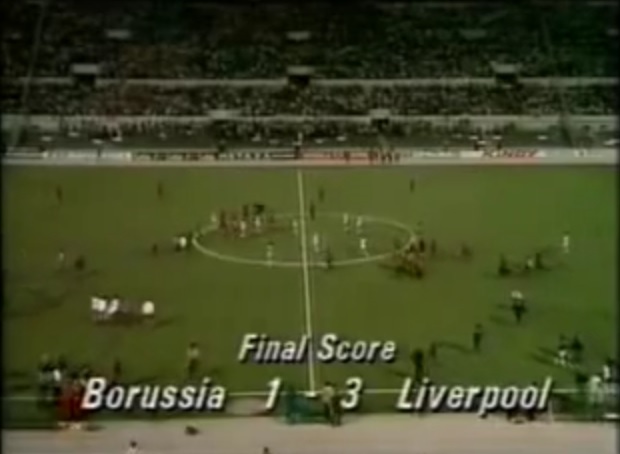