The initial plan was to do a stats piece looking at the how West Brom compare to the rest of the league, with specific focus on set-pieces; and how they’re likely to target the flaws in the Reds’ own defensive set up against corners, free-kicks and long throws.

Then, to save me a lot of work, Alex Fischer recommended this in-depth look at the Baggies this season by the ever excellent Alex Stewart. Here is the introduction, but it is worth the time to read the whole piece, and adds some context to the video analysis coming up:

When 35.9% of your assists come from a set-play, and 21.8% of your chances from set-plays, it’s fair to say it’s something that’s being concentrated on and to no little effect. West Bromwich Albion are the set-play kings this season, both absolutely and relatively. The recent win at Arsenal, which put significant further pressure on Arsene Wenger, cementing West Brom and Tony Pulis’ reputation of maximising the attacking potential, or at least trying to, of set-plays in general and corners in particular.

Of 39 goals, they’ve scored 14 from a set-play, either directly (a header straight from a corner) or indirectly (converting a flick-on from a near-post header, say). Their 35.9% of goals from set-plays as a total of overall goals scored is a league high in the Premier League. Their 21.8% of chances created, including assists, from set-plays is also a league high.

Alex looks at the percentage of chances each side creates that are from set pieces: 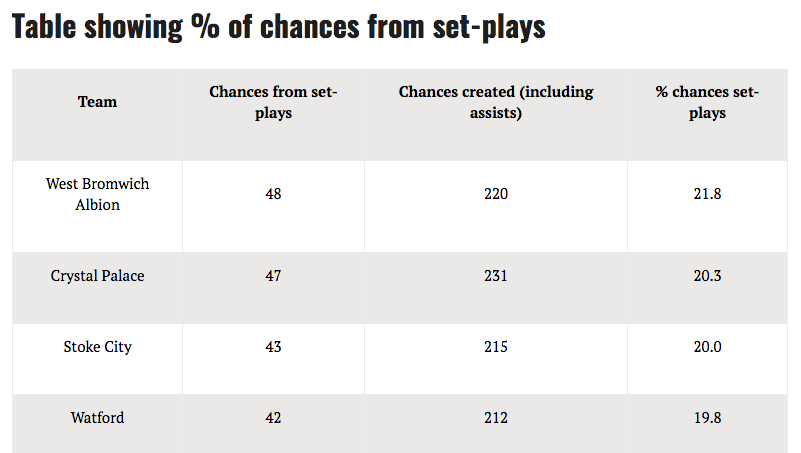 The top four includes West Brom top, Big Sam’s Crystal Palace second, then another former Pulis side Stoke City in third; finally, the biggest and tallest side in the league, Watford, are fourth. 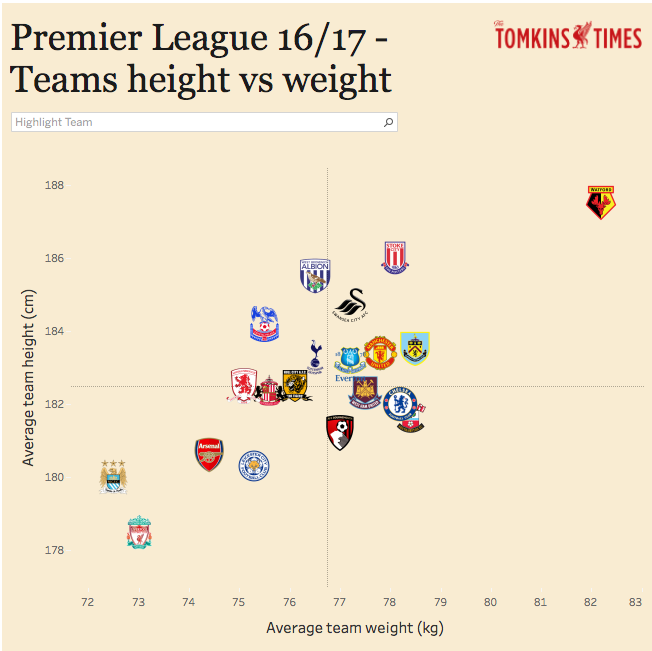 In terms of opponents, there isn’t another in the league whose strengths align so perfectly with our weaknesses. Set-Piece Supermen against a Liverpool who, especially since the turn of the year, have been conceding chance after chance, and often goal after goal, against a variety of set piece attempts. I recently when through all the chances the Reds have conceded in their last ten games, and it was often like watching the same chance: long throw, flick on, doesn’t deal with the second ball, big chance conceded (go and watch the Burnley match again, I promise!).

Then there’s this Opta Pro Forum Presentation by Neil Charles, highlighted by Terry Dolan on the Stats & Analytics thread, and looking at ‘The Secret to Tony Pulis’ Success’. The WBA part is from 12 minutes onwards. Neil looks at their shot locations, as well as the location where the chance was created. The contrast to other teams is worth a look, as Pulis’ sides shoot from central inside the box, whether that’s a header or from the ground, and the same trend applies to the location of the chances: two circles around the corner of the penalty box on the diagonal.

Before you turn away from this article, in pure disgust at the problems Pulis is likely to cause us. There is hope from this parish though, in the form of short blogpost (as Beez goes all retro on us) about our underperformance against West Brom, Crystal Palace and Stoke. All I’ll say is: we are due a win!

Over the previous 336 Premier League matches, Liverpool’s average shots on target difference per game has been 2.13, yet against the teams of Tony it has been 2.93; 38% better than average, in other words. In my opinion, Pulis has definitely been lucky to get as many good results against the Reds as he has.

On free-kicks, WBA use four players within the defensive ‘line’, all initially slightly offside, then three runners, but the they aim to overload on the front post, or drop deeper for the second ball.

Surprisingly, there doesn’t seem to be any particular secret to the Baggies’ set piece success though.

They have three or four takers, but usually Brunt or Chadli. They mix it up between away swingers and in-swingers.

First of all, they use their strengths, especially against ‘weaker’ sides: send forward the giant cavalry; McAuley, Dawson (and Evans). Add those three to the likes of Phillips, Morrison, Livermore, and Rondon gives any defending sides a few headaches, probably literally.

You may need to pause and rewatch some of these clips to get the full appreciation (or hate) of West Brom’s corners. They seem better planed, and obviously more threatening.

They use a variety of techniques, again mixing it up: there’s the use of short corners to change the angle; but the primary focus seems to be inswinging corners. Chadli from one side, Brunt or Mclean from another. Often they aim for the six yard box, centrally, drawing out the goalkeeper to foul him, giants everywhere, causing havoc.

Southampton defended solidly, rebutting everything thrown at them, against a variety of set pieces. And yet, in the last minute, West Brom still managed to create a big chance, and should have equalised. This time using the near post flick on for the second runner in the middle. It diverts and confuses the markers, but requires pinpoint accuracy of delivery and then execution of the flick on (and then the finish, which is poor).

I was expecting to see the Rory Delap-inspired long throw routine going through the Baggies’ attacking throw-ins, when in truth they were a bit of a let down. Nothing on Burnley’s judging by these clips.

I couldn’t find a long throw into the box across 75 different throw ins. They may have tried one at some point this season – and will obviously roll it our against us – but there’s nothing to analyse. They wait, get two or three into position, then one of them runs towards the ball; knocks it back to thrower, before trying to work a crossing opportunity.

Karius was the Reds’ keeper at the time, and it appears that West Brom target him, with five players around his ‘zone’. This also prevents Liverpool defending their ‘zones’ on the edge of the six yard box. Three go to the near post for the flick on and overload; one stays central and one goes to the back post. We fail to deal with the front post overload, or the second ball, and Chadli again should hit the target.

On the second clip, this time Brunt goes for the away swinger, and the Reds are allowed to defend their zones on the six yard line; however, this time it’s four or five runners, all aiming for the same spot. Aiming for chaos and massive overloads. The delivery is spot on, and we fail to deal with first or second ball. West Brom score.

On the first clip, you can see the double team WBA try on Lovren. They hold back a runner from the edge of the box, who then goes alongside Rondon to overload Dejan.

On the second clip, it is the floated far post knock down. WBA, at 2-1 down, had a player in acres of spaces near the penalty spot. Who really should have scored, and we were lucky to get away with it.

It is unfair to place too much stock on the other clips as we had a very different line up, full of kids, as we were preparing for the Europa League final.

In truth, based purely on their last five games (and the matches against us) I was slightly disappointed with their free-kick and throw in set ups. There’s not much originality on the free kicks, or, in truth, effectiveness recently.

However, from corners they take it to another level. They target players or perceived weak links, with front or back post overloads, and players dropping off centrally into space for the knockdowns or second balls. They mix up the delivery as well to confuse opponents, so if you’ve planned for a direct corner, then the marking is messed up when they go short and change the angle from in to outswing. The players co-ordinate and know their roles to the split second before the delivery comes in. They can gang up on the keeper, or ambush the defensive system with plenty of runners; looking to exploit the static nature of zonal marking at times.

If at all possible, avoiding giving away a corner in the first place would be a sensible strategy. And learn from this, as we’ve got Crystal Palace soon afterwards!