The Blind Side and Backwards Pressing

The Blind Side and Backwards Pressing

November 30, 2016 In Subscribers Only, Talking Tactics

It’s well-established that Liverpool’s pressing game has improved under Jürgen Klopp since his arrival in England. The German has implemented a style of play that puts the opposition under huge amounts of pressure, often forcing hurried clearances and inaccurate passes. Because of the potential to regain the ball, this acts as both an offensive and defensive strategy, therefore forming the cornerstone of everything Liverpool produce. If their pressing and counter-pressing are sub-par, both the attack and defence are limited.

One of the key principles that has made both the pressing and counter-pressing such valuable weapons are their multi-dimensional nature. When the ball is lost, the opposition ball player is aggressively targeted from all sides, regardless of his location on the pitch. If he is near the touchline, he is forced towards it and all passing options and angles are immediately reduced.

This effect is further enhanced by using the opponent’s blind side against him. This means pressing from behind, and regaining the ball before he can pass it to a teammate. It sounds simple, but there are many factors that make Liverpool so deadly at regaining the ball in this way.

The most common form of blind side usage in pressing is cover shadows. This means the aggressing presser will adjust his movement to ensure a passing option behind him is closed. It is also common to adjust this movement in the form of a curved run, thereby forcing the opposition to one side of the pitch. This reduces the amount of space the team must cover when they begin the next stage of the press.

The concept of reducing space is perhaps the most important principle in relation to defending in football, and is usually achieved by creating a compact defensive structure with players in a tight, organised fashion. 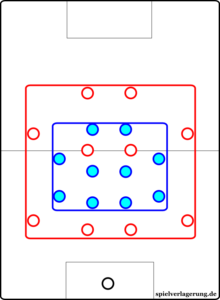 This is so important because it means the players nearby the ball have a smaller distance to cover to press towards it, meaning it takes less time to do so. Similarly, teammates can more easily cover for a lost individual duel if they are nearby, which reduces potential defensive weaknesses of any individuals. It also creates more pressure on the opposition, forcing them to make quicker decisions.

Even a great defender will struggle if he is forced to defend a huge space on his own.

Of course, because of the nature of football, there will always be spaces somewhere on the pitch. But splitting the pitch in half and increasing the aggression of the team’s ball-orientation is a form of prioritisation in the use of the team’s resources. It leaves the space in an area of the pitch that the opposition cannot immediately access – the far-side. Particularly if the opposition central midfield options are well-covered by the compact defense and cover shadows of the pressing team, it is difficult to circulate possession to the other side.

Often this will result in a simple horizontal re-circulation of possession along the backline. This is relatively easy for the defense to shift towards. However, against an un-coordinated press (of which Liverpool have faced many this year), a simple pass such as this can create lots of small spaces to take advantage of.

Equally, if a long ball is played towards the previously-vacated area, the time it takes to travel is often sufficient for a co-ordinated defense to re-adjust and challenge for the aerial duel or second ball. A long ball such as this is also difficult to play with accuracy under the pressure that a compact press brings.

As well as reducing the space to press, the curved movement and adjusted body shape that is common as a result of the use of cover shadows also acts as a trigger to his teammates. They can all now prepare to press towards one side of the pitch. This dual benefit is why the role of the striker is so important to a team’s high press, and perhaps one reason Klopp prefers Firmino to Sturridge in that role.

Whilst Sturridge is comfortable splitting the pitch and forcing the opposition one way, Firmino can more effectively do so using his cover shadow rather than merely positioning himself near the opposition player. This allows him to also aggressively press the ball player once the pitch is split. In many cases, he will continue pressing the opposition midfield if they attempt to build play.

This backwards pressing is so effective because it relies on them to be aware of the entire pitch around them – something many players are not comfortable with. Sturridge will generally not look to exploit the opponent’s blind side in this way, meaning the opposition have fewer reference points to consider when making their decision and reduced chance of an unexpected tackle from behind.

The nature of the backwards movement also often naturally allows for combination play. Given that the use of the blind side press has become so prevalent in Liverpool’s play, nearby teammates are now comfortable adjusting their positioning so they are immediately able to receive the ball once the blind side tackle has been made. This allows for an immediate transition whilst the opposition’s defensive structure is disorganised.

Because of the strategical advantages the centre brings for the team in possession, a regain-into-combination-play in this area is particularly effective. Lallana and Firmino are particularly active in recovering the ball in this way, and the deeper midfielders are increasingly comfortable adjusting their positioning to react accordingly.

Roger Schmidt’s Red Bull Salzburg team often utilised a similarly high-tempo approach to attacking transitions, and it’s therefore no surprise that Sadio Mane has benefited from these situations. His pace to stretch the defense in behind or intelligence to understand when not to do so has been key in allowing such fluidity for the likes of Lallana in these moments.

The touchline as a tool