Red Letters From the Colonies – Part 2: The Dark Ages …

Red Letters From the Colonies – Part 2: The Dark Ages …

Despite all this time in the US, my emotional link to the club has never been broken. What can break a tie that has its roots in your early youth and then is reinforced by continued success? I have a distinct memory of someone at (very early) primary school asking me what my favorite colour was, red or blue? “Red” I replied, “Oh, so you should support Liverpool then”, and there I was, a Red, have been and always will be. If there is one slight disadvantage of watching the games in the morning over here it’s that my wife knows that, if we are playing, then Saturday (or Sunday) will be a good day as long as we win. If we lose, not so much. I kick every ball, berate every foul and celebrate every goal. 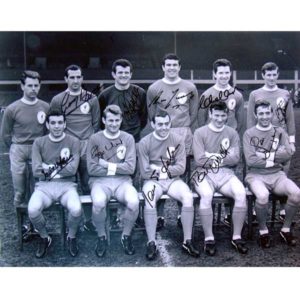 The first game I really remember was the 1965 FA Cup Final when I was just short of my 11th birthday. I watched it live on BBC, just about the only game shown live in those days, and had to suffer through the agony of extra time. Not nearly the agony of poor Gerry Byrne who broke his collarbone early in the game yet soldiered on, but agony nonetheless. It made the final victory all the sweeter of course, beating Leeds 2-1, the first time we had ever won the trophy in our 73 years of existence. I still remember every player from that team, the names trip off the tongue easily: Lawrence, Lawler, Byrne, Strong, Yeats, Stevenson, Callaghan, Hunt, St. John, Smith and Thompson. A few years ago my brother sent me a Christmas present, a black and white poster of that team that he had found, individual photographs of all eleven players plus Shanks, hand signed by my favourite player, Ian St. John. It’s one of my treasured possessions.

But, in the eighties and nineties the almost complete lack of information about what we were doing and who was playing, and inevitably life in general, caused me to focus my sporting interests in other directions. My three month sojourn in South Jersey had coincided with the height of Baseball season and I became a firm Philadelphia Phillies fan, but I moved on to Dallas (and the Cowboys) before the start of ‘Football’ season and, thankfully, never became a hated Eagles fan.

Note: Here I must pause to ‘apologise’ to my three eldest children, (especially my son Michael, TTT contributor and Philadelphia resident) who are all lifelong Eagles fans, sorry guys, kind of …

Those three months in South Jersey produced another significant effect on my life, I had met and dated a girl who ended up moving to Dallas, and not very long afterwards she became my wife. In 1981 we left Dallas behind and moved back to South Jersey, to a small rural town of 50,000 people, a place where guns were relatively sparse and certainly less obvious, a four storey building was a skyscraper, a traffic jam was defined as three cars waiting at a traffic light and a very good place to raise children. The weekly calls home became every two weeks, the Echo ‘care packages’ slowed, phone talk was soon centred on grandchildren and trips to England slowed down. Life happens, it’s hard to avoid.