Klopp’s First 38 PL Games Vs The Rest (And Rodgers!)

Klopp’s First 38 PL Games Vs The Rest (And Rodgers!)

October 22, 2016 In Statistical Analysis, Subscribers Only

Since Klopp has recently completed his first 38 Premier League games as Liverpool manager, I thought this might be a good time to look at how he has performed numbers wise, compared to the rest of the league and against Rodgers at his best and unfortunate worst.

Andrew Beasley (Beez) put the 38 game league table together on his blog and is shown below. As some have suggested, it’s not quite as good as the ‘media hype’ surrounding the German, but Paul has thoroughly explained the odd circumstances that Klopp has inherited: taking over eight games into a season, someone else’s squad, players lacking the required fitness, very little time to train his methods, huge fixture congestion towards the end of the season resulting in heavy squad rotation in the league, and more. 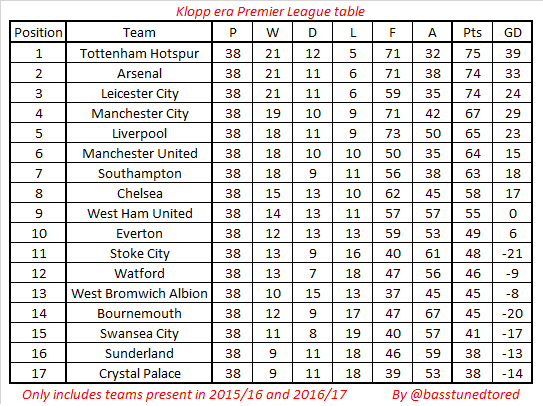 As they say, the table doesn’t lie (even though it does), so what do the numbers say?