September 15, 2016 In Match Discussion, Subscribers Only

Part One by Gary Fulcher.

Liverpool are back on the road for Matchweek five with a trip to Stamford Bridge to face Antonio Conte’s Chelsea on Friday evening: 8pm kick off UK time. Second placed Chelsea are one of four teams still unbeaten in the league, with the other three being leaders Manchester City, third placed Everton and fourth placed Tottenham.

Liverpool won the corresponding fixture last season 3-1 but it’s our only win from the previous eight meetings home and away against the Blues. Conte’s side have a 100% record at home so far following wins over West Ham (2-1) and Burnley (3-0) in the league and a 3-2 win over Bristol Rovers in their League Cup 2nd round tie.

Blast from the Past

For more than four and a half years no Premier League side was able to take maximum points against Chelsea at Stamford Bridge, with Barcelona the only side in all competitions who were able to record a victory at the Bridge between February 22 2004 and October 25 2008. It started under Claudio Ranieri during the tail end of the 2003/04 campaign going the final nine home games of that season unbeaten following Arsenal’s 2-1 win on February 21 2004. Jose Mourinho then turned Stamford Bridge into a true fortress never losing a home game in the league during the three and a bit seasons he was in charge, with that defeat against Barca the only blot on their home record in any competition.

The record was extended by Mourinho’s replacement Avram Grant who remained undefeated at Stamford Bridge in all competitions en-route to finishing 2nd and reaching both the league Cup and Champions League final in 2007/08, losing both.

Which then brings us to Grant’s replacement; Luiz Felipe Scolari for the 2008/09 season. Chelsea and Liverpool went into that fixture in 1st and 2nd respectively with both sides recording six wins and two draws from the opening eight league games, although Chelsea had a far superior goal difference of +16 to Liverpool’s +7. Scolari’s side had previously dropped points at home against Spurs and Man Utd with both games ending 1-1,

Liverpool had failed to score in their four previous league visits to Stamford Bridge (losing three and drawing one) and had won just one of their previous eight league games home and away against the Blues (five defeats, two draws). In fact, our record at Chelsea has been consistently poor since 1990/91 with the Reds claiming maximum points on just one previous occasion from 18 previous trips to Stamford Bridge in the league prior to this meeting; a 1-0 win on January 7 2004 courtesy of Bruno Cheyrou.

Ten minutes into the match and Xabi Alonso had struck to put Liverpool 1-0 up, with Alonso hitting the post from a free kick in the second half, Liverpool more than deserved the three points and in the process ensuring Chelsea’s unbeaten home record didn’t extend to an 87th game.

The radars below are team-based, include stats from home and away only and are created using defensive metrics such as ‘big chances conceded’ and ‘on ball defensive errors’. Chelsea, at home, in 2013-14 and 2014/15 were one of the best defensive units of the past five years. You won’t see many better defensive radars than those two. Last season they were fairly average.

On the Reds, they seem to have a solid shot prevention structure throughout; especially when you remember their numbers are from away games only. However, we gift goals through defensive errors on the ball more than any other side in the league. Incidentally, the best ‘away defensive’ radar we have is from Dalglish’s last season in 2011/12. Very few errors or big chances conceded, and a very good structure for preventing shots (although it wasn’t at the back where we had issues). With all that in mind, last season (defensive errors aside) we had one of the best defensive structures in the league away from home. 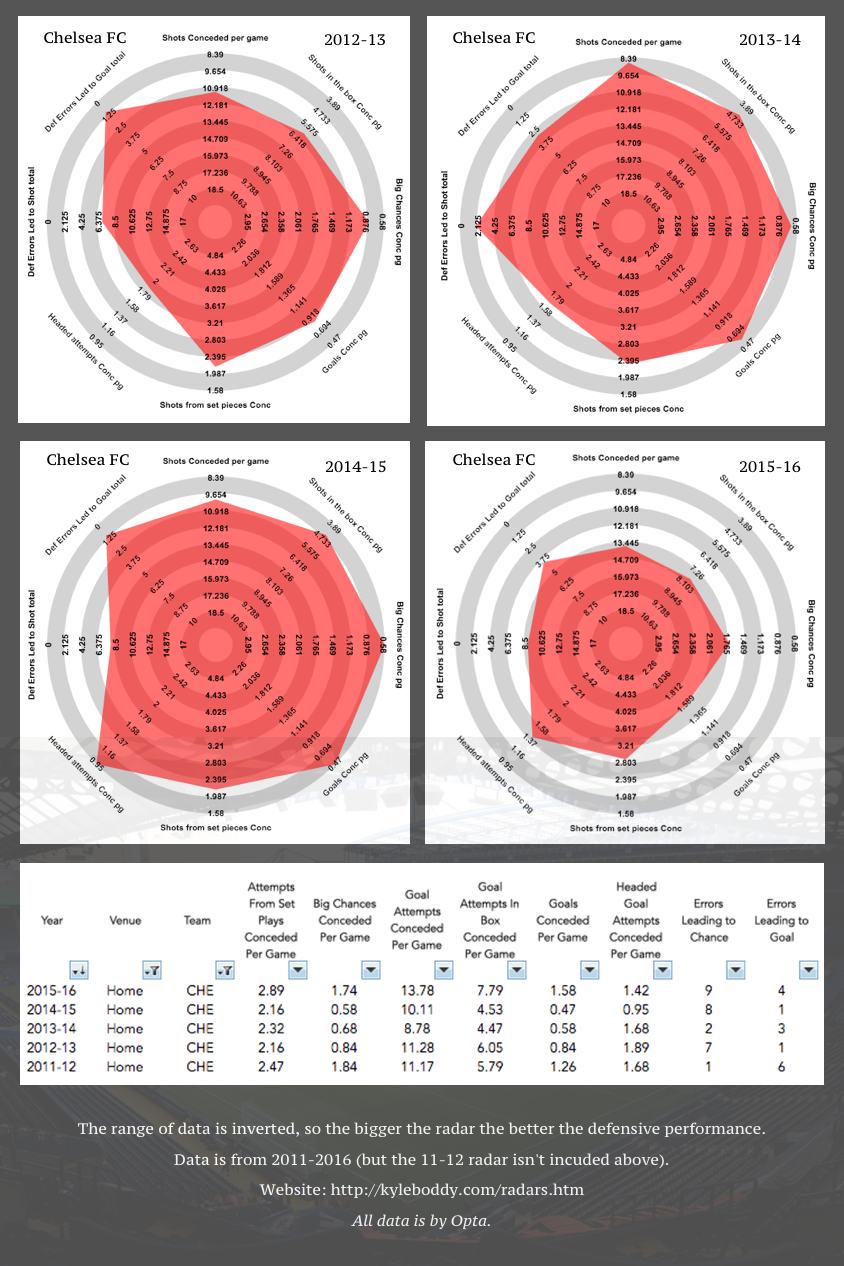 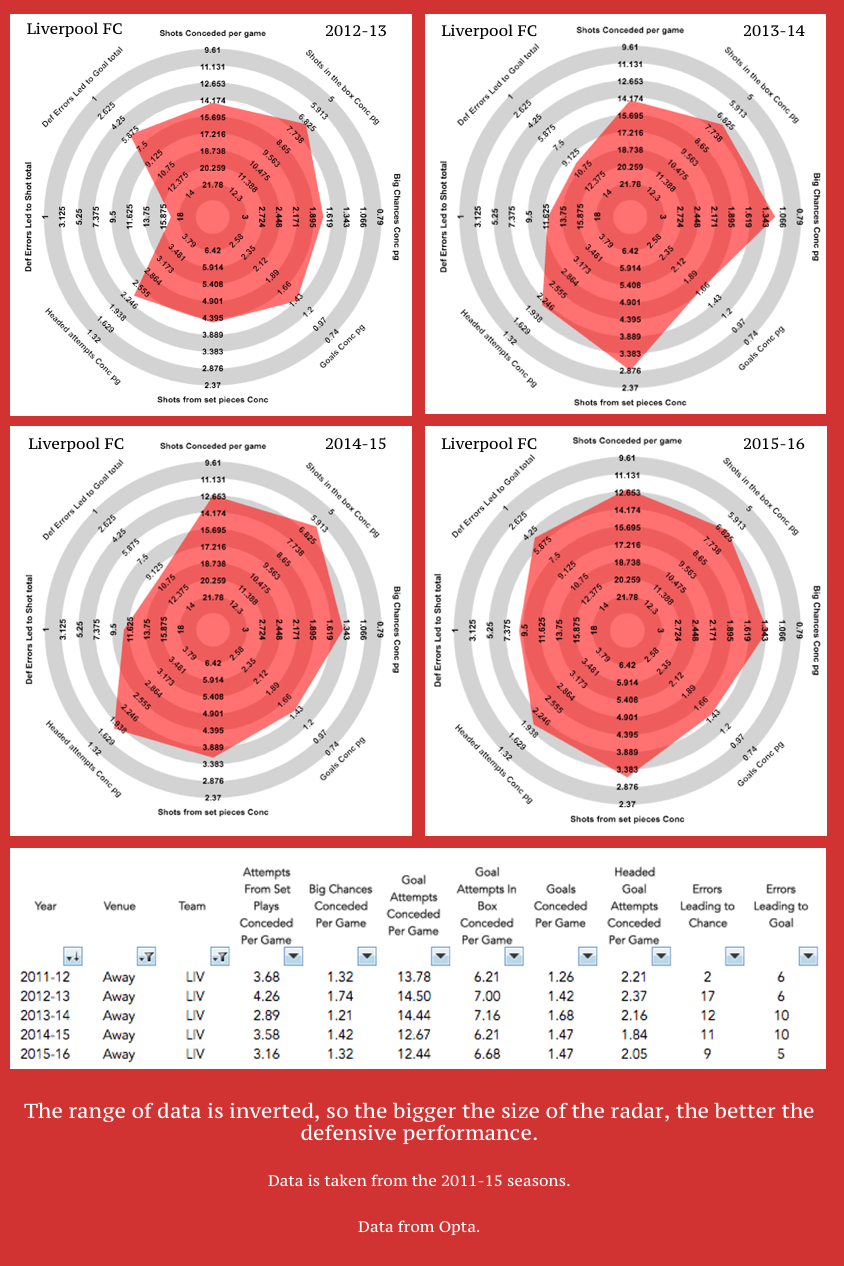