As the traditional photos emerged following the start of pre-season training, one thing immediately struck me: we have lots and lots of footballers at Liverpool. 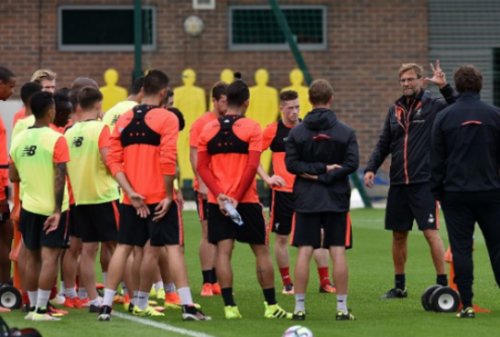 And this isn’t even including all the players still on summer holidays or involved at the Euros! The next thing that struck me is that if all these players stay then there are going to be lots and lots of bored, unused, highly paid footballers. This article will try to assess just how big a problem this might be. One important note is that this analysis makes no assessment of player quality, it treats all players as equal bodies to fulfil a schedule.

Number of matches played in a season:

So how many matches might Liverpool play next season?

Just 15 outfielders made 93% of the starts in all competitions. All made more than 15 starts. 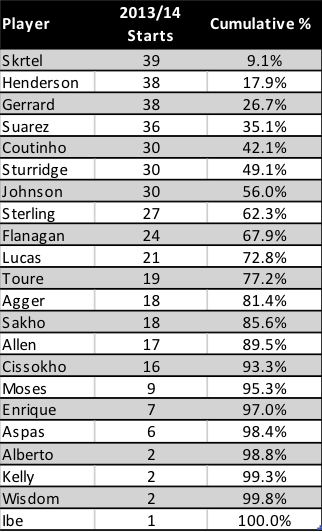 In 2011/12, we reached both domestic cup finals and played 51 matches meaning that there were 510 starts for outfield players 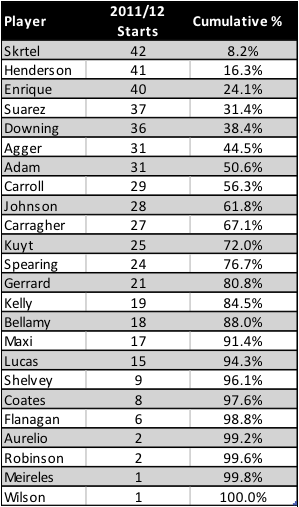 What about last season?

9 players made more than 30 starts

The 7 most used players made 302 starts.

You can clearly see the standout at the top and lower ends in 2015/16 on this chart: 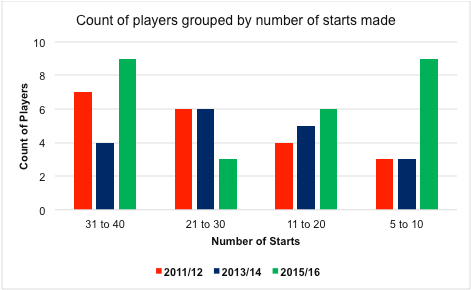 The below chart plots all the data in the above tables. The different nature of the 3 seasons and the players used is clear to see: 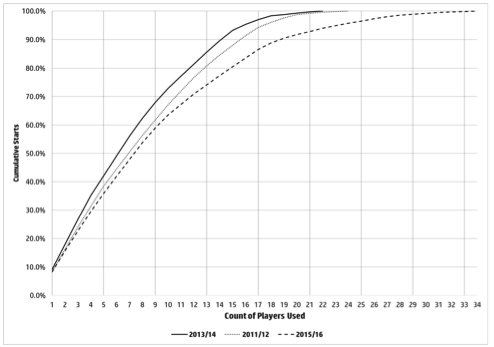 So what does all this mean for this coming season?

According to the official site, Liverpool currently have THIRTY SEVEN first team squad members who have previously started a match for the first team. And this is after 5 players have already left (Enrique, Toure, Rossiter, Sinclair and Teixeira)!

If we go on the best case scenario of 2011/12 (i.e. do well in both domestic cups and play 50 games) then 17 players will make 15+ starts. Based on the current squad, a realistic list of 17 could be those listed in the “Senior Pros” column below: 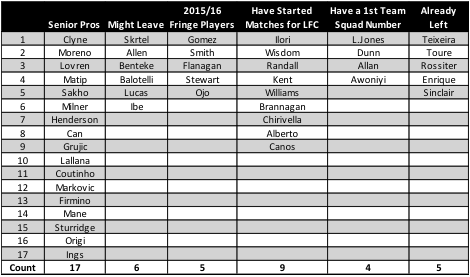 But that still leaves TWENTY ONE other players fighting to make a handful of starts. The above list also has some notable omissions, including some very highly paid senior pros: Skrtel; Benteke; Balotelli; Allen; Lucas and Ibe. A conservative estimate is that those 6 players make a combined £500,000 a week in wages. That’s a cool £25m a year.

Then there a number of low paid “fringe” players who put in some very good performances last season and all made 5-10 starts: Joe Gomez; Kevin Stewart; Sheyi Ojo; Brad Smith and Jon Flanagan. How will their development be continued this season?

Finally there are 9 other players in the squad, aged 18-23, who have started at least one 1st team match: Ilori, Wisdom, Randall, Kent, Williams, Brannagan, Chirivella, Alberto and Canos.

It’s conceivable that 10 to 12 more players will leave Liverpool before the end of the transfer window, either on permanent deals or on loan deals. After looking at this in detail, I wouldn’t be surprised if as many as 15 players left. And that’s before we even consider what happens when we sign more new players! Finally, if we don’t progress in the domestic cups next season then the problem is going to be exacerbated.