The End of the Storm?

The End of the Storm?

“…an epic swindle at the hands of rogue corporate directors, Broughton, Ayre and Purslow, who considered to sell the iconic Liverpool Football Club at a price they know to be hundreds of millions of dollars below the true market value”

The trip to the High Court in London, as media cameras descended and supporter groups such as Spirit of Shankly anxiously and breathlessly demonstrated outside, has become the stuff of grim legend in our recent past. But like all legends, myths have sprung up to replace facts and in this tangled and convoluted legal minefield, it has been forgotten by some that it was actually the hated American owners – Tom Hicks and George Gillett – who initiated, at least indirectly, the visit to London. 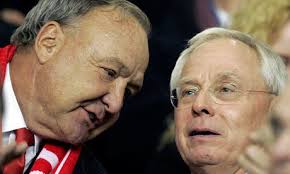 “You Ok to sort out the getaway car George?’

In 2007, following a refinancing of the loan from Royal Bank of Scotland, the bank had insisted that Martin Broughton be brought in with essentially one role: to sell the club. Effectively what it now meant was that Broughton, together with his fellow directors Ian Ayre and Christian Purslow, could outvote their bosses in a decision to sell the club once a reasonable offer had been received. Hicks and Gillett felt that the club was worth between £450 million and £600 million and vaguely claimed to have possible buyers lined up who were willing to shell out these eye watering sums. But Broughton – club chairman since early in 2010 – and his two directorial allies had accepted a £300 million offer from New England Sports Ventures, a US conglomerate led by John Henry and Tom Warner. So it was that on the 12th of October, as results on the pitch went from bad to worse, the two Americans who had so ineptly run Liverpool Football Club had an injunction taken against them by the RBS to prevent them from changing the makeup of the board.

How bad could it have got? This was firmly in the realms of legality; sentiment and affection had no place in the halls of the High Court and the judges would act solely within their legal remit. As John Williams put it in his peerless chronicle of the history of the club, Red Men:

“If the NESV purchase of Liverpool had been legally blocked by Hicks and Gillett, it was still possible that Liverpool FC could have ended up being owned by the publicly funded RBS (whose loan was still outstanding and due to be settled on 15 October) and/or could even be docked nine points by the Premier League for falling into administration by dint of being unable to repay the debts acquired under the inept leadership of Hicks and Gillett. What this Kafka-like state of affairs meant was that the future of this previously commercially and culturally successful and rather sober and much celebrated 128 year old English football club – a globally recognised sporting ‘brand’ – briefly hung in the balance.”

The spectre of relegation was shockingly tangible. With the Reds already looking like they were stuck in the quagmire of a footballing dogfight to escape the dreaded drop, a deduction of nine points may well have been fatal – despite the redemptive football that was to come after Christmas. Less than 18 months after the club had narrowly lost out on their first Premier League title, their place amongst the English elite – indeed, their very existence, was under threat.