The Week That Was: Scintillating Reds Reach Europa Final

The Week That Was: Scintillating Reds Reach Europa Final

In the end, we deserved the defeat and they deserved the win, but a big, big part of this result was our performance. We have to accept this, recover, prepare again and play much better.

Today it did not work too well, but it is not a problem for the future, it is only a problem for today. A result or a game like this would only be completely senseless if you do not use the information for the future – and that’s what we will do for sure. We know we have to improve, the players have to improve – we know this and we knew it before – but even in this moment we could have played better. It’s not about the squad or something, it’s only about the performance today.

Daniel Sturridge looked ahead to the Europa League after the 3-1 defeat at Swansea:

“Absolutely gutted. Thanks to the fans for travelling and supporting us. God willing Thursday will be a better result.”

Emre Can returned to training yesterday following an ankle ligament injury in the 4-3 victory over Dortmund. (Liverpool Echo)

Andre Ayew, who scored twice for Swansea against Liverpool at the weekend, offered to play for the Anfield giants for free prior to his move to the Welsh club.(Mail)

Jürgen Klopp has hailed the support of Liverpool fans around the world as ‘one of the things in life you cannot buy’ ahead of his side’s Europa League semi-final decider against Villarreal. (LiverpoolFC.com)

“I have not enough words for this. It’s one of the things in life you cannot buy,” he told reporters at a press conference to preview the clash.

“Feeling things like this is the most special [thing], I think that’s the main thing of football. These moments when you really know we are all together.

“It’s not only the crowd in the stadium, I saw a few videos of how fans were celebrating our fourth goal [v Dortmund] at home, and I’m pretty sure not everybody had their mobile phone on so a lot of wonderful celebrations were missed because of this fact.

“It’s a moment for the whole Liverpool world, all the fans around the world.

“Everybody will watch [on Thursday] if they have a television; if you have a radio, you will [listen] on the radio; if you only have the internet, you will follow it on the internet.

“Everybody will be involved in Liverpool, and to know about this is no pressure. It is these 11 starters plus all the boys on the bench, plus all the boys in training, plus the staff – we’ll do everything. I’m happy about the opportunity.”

And both Simon Mignolet and Didi Hamann said Anfield could inspire Liverpool to victory against Villarreal tomorrow night. (LiverpoolFC.com)

Divock Origi has revealed he is making good progress in his rehabilitation from an ankle injury and says he has not yet given up hope of a return to action before the end of the season. (LiverpoolFC.com)

The 20-year-old midfielder was signed by Jurgen Klopp in a £5.1million deal back in January but insisted on remaining in his homeland on loan until the end of the campaign in order to help them clinch silverware.

Liverpool stand-in skipper James Milner, 30, hopes club captain Jordan Henderson, 25, will be fit to to lead the side in the Europa League final against Sevilla on 18 May. (Liverpool Echo)

Jordon Ibe filmed a belter video from the team bus last night. Get on it! #LFC pic.twitter.com/03JVQe1tl9

The scenes around Anfield Road to welcome the team bus were incredible, and created an atmosphere that carried on into the ground with another rousing rendition of You’ll Never Walk Alone. 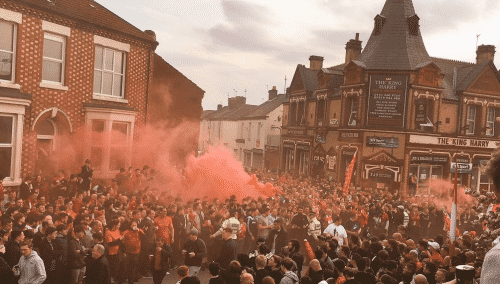 Here’s the highlights from the barnstorming victory – and performance – against Villarreal. (Click here)

What the managers said after the three-nil win for the Reds:

“Wonderful night, brilliant game from my side. What a performance. The first half an hour was a big emotion. It was great. The last 15 minutes of the first half we lost patience. The second-half plan was to keep going with the emotional football but using the brain a bit more and in the end, brilliant.

“Everyone spoke a lot about this team before I came here. It was all about quality and not good transfers. I came here because I thought they had a nice squad and now we are in the final.”

“Things didn’t work out how we had planned them. It hit us hard conceding that early goal, it was a hammer blow.

“It was tough against an opponent who played with a huge amount of intensity, maybe on the margins of the rules at times, but it was allowed.

“Liverpool played better than us but for all their superiority they didn’t create too many chances. When we got to the sending off it was pretty much game over by then.”

Daniel Sturridge has scored in four of his past five appearances at Anfield in all competitions. 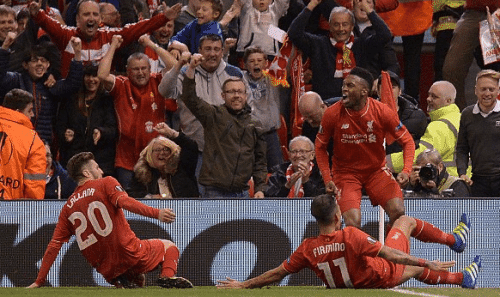 The Reds will face Spanish opposition in a European final for the third time, having played Real Madrid in the 1981 European Cup Final (won 1-0) and Alaves in the 2001 UEFA Cup (won 5-4 after extra-time).

Klopp’s side will face current holders Sevilla in the final after they overcame Shaktar Donetsk in the other Europa League semi-final, winning three-one.

Uefa confirmed the Reds’ ticket allocation for the match on the 18th May at St Jakob-Park will be just 47% of the 35,000 capacity. The remaining tickets are divided between “contractual supporters” of 41%, which includes seasonal hospitality members and priority rights holders, 10% to matchday officials and players plus a final 2% to contractual partners.

The 20-year-old has been the subject of an official approach from the Reds, with the midfielder also linked with Manchester City, Atletico Madrid and Bayern Munich.

Liverpool can sign FC Cologne’s goalkeeper Timo Horn for just £7million if they complete the deal before the end of this month. (Daily Express)

German magazine Kicker claim the 22-year-old has a clause in his contract which allows him to be signed for around £7m.

That vibration you can feel is indignation from Evertonians … 😉