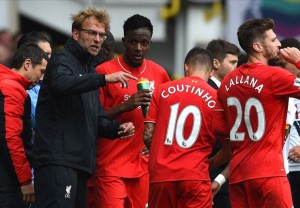 Liverpool return to Premier League action on Saturday – 5.30pm kick off UK time – with a home fixture against title-chasing Tottenham Hotspur. The Reds are seven points behind 4th placed Manchester City with a game in hand while Spurs in second are five points behind the leaders Leicester City as Mauricio Pochettino’s side look to secure a first league title triumph since 1960/61.

The two sides played out a 0-0 draw at White Hart Lane back in October in what was Jürgen Klopp’s first game as Liverpool manager. That stalemate meant the Reds are unbeaten in six (five wins) against Spurs home and away in the Premier League, while the corresponding fixture last season ended with a 3-2 victory for the Reds.

Why Mario Götze Is Perfect for Liverpool FC