The first Premier League game of the New Year saw West Ham completing the double over Liverpool in what proved to be an intriguing clash.

Bilic made only a few changes for this game. Cresswell, returning from his minor injury, started at left-back with Jenkinson back on the bench and the rest of the back four remaining the same. In midfield, Lanzini replaced Song. Up front, Carroll was chosen ahead of Zarate following his winner against Southampton.

For Liverpool, Klopp also kept his side largely unchanged. Henderson’s injury meant Lucas was always going to start this game, with the only unenforced change being Ibe replacing Lallana down the right of the German’s 4-2-3-1 formation. 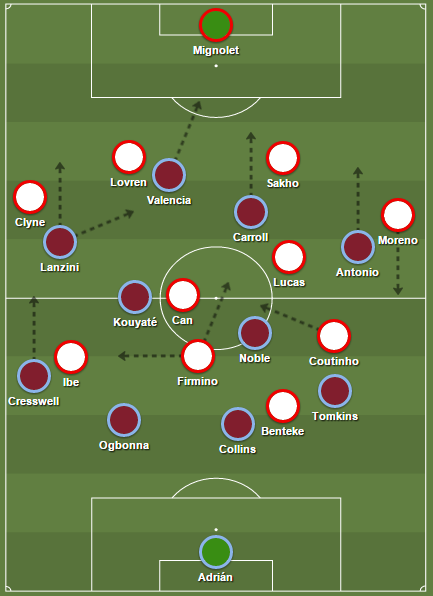 Bilic parking the bus without putting the handbrake on – again

West Ham’s starting line-up suggested Bilic would continue with the 4-1-2-3 he favoured in the past month or so with him rotating the third midfielder alongside Noble and Kouyate (as was the case in the other two games during the festive period too). Previously, Obiang and Song shared that duty, now it seemed to be Lanzini’s turn. Instead though, the Croat surprised with his choice to go with a 4-4-2 and play Lanzini down the left and Valencia up front next to Carroll.

On a tactical level, such a move looked overly and arguably unnecessarily risky given the chosen personnel (i.e. no holding midfielder and a front four built to attack rather than help out defensively) and how easy it would have made Liverpool’s job to completely dominate the midfield zone. However, this was clearly useful given what Bilic’s intended overall game plan proved to be.

As back in August at Anfield, West Ham were perfectly content to sit back and invite pressure, letting Liverpool have all the possession before, upon possession turnover, counter-attacking with great urgency and plenty of players quickly pushing forward from deep.

Time To Give Up On Klopp?